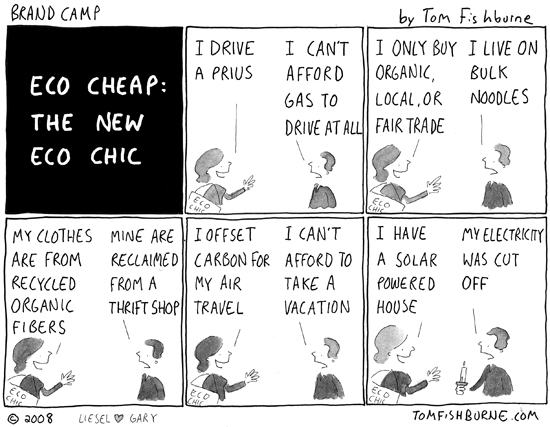 My wife showed me a Grazia article the other day that announced belt-tightening as this season’s eco chic. It told the story of a cocktail party where everyone attempted to one-up each other on bargain purchases. It then described European discount chain ALDI as nouveau fashionable.

It made me think about the role of ethical brands in a down economy, which I’ve touched on before. How will ethical brands fair when everyone is counting their pennies (particularly brands that command a premium)?

In a funny way, some of this recessionary climate may actually force even greater consumer change in relation to the environment than purchasing sustainably-minded brands. This made me think of “eco cheap” as the next “eco chic” and prompted this cartoon.

In these bumpy economic times, I think it will be even more important for brands to make sure they are meaningful. This is an acid test for meaningful brands, because private label is more tempting than ever. This may mean re-framing your brand in a completely different way.

As a side but related note, happy honeymoon to Liesel and Gary, whose names I jotted at the bottom of this cartoon and whose wedding I went to this weekend. Liesel’s an old old friend and Gary told me how he retrofitted his car to run on vegetable oil, which involved negotiating with his local dim sum restaurant to fill up his car for $5 a tank. Driving in it may smell like dumplings, but boy is it “eco cheap”. 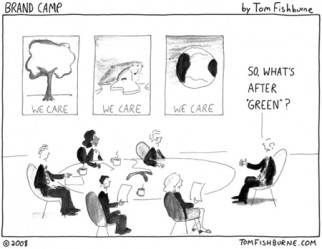 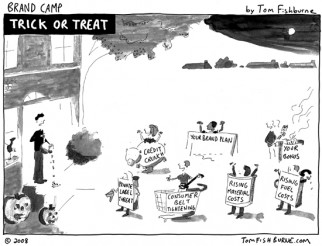