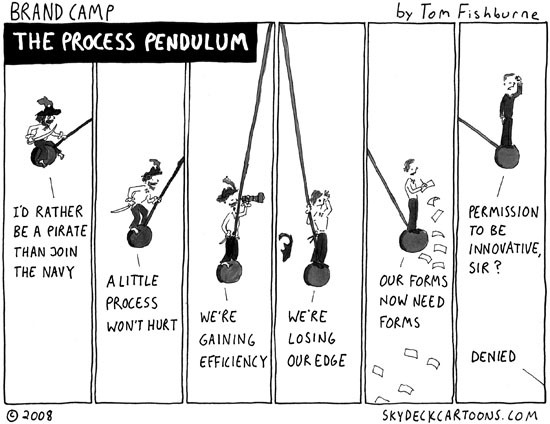 I once worked in an Internet startup that grew from 25 employees to 2,500 in 3 years.  Much of that was through acquisition — basically 30 startups rolled up into one.  The resulting patchwork company then went public (and filed for Chapter 11 about a year after that).  Kind of a crazy rollercoaster.

Anyway, the midst of it all, I first started thinking about “the process pendulum”.  Our process swung erratically from non-existant to command-and-control.  We were scrappy and entrepreneurial in year one, and then we added layer after layer of bureaucracy to restrain the chaos of so much growth.

We wanted to upgrade our project management, so we hired this guy to run our project management group who had only project-managed large-scale, 5-year construction projects for the military.  It was such a bad cultural fit, it was kind of funny.  We literally had to print off emails we wanted to send him, walk them to his desk, and stamp them with a timestamp he kept there before he would read them.  At an internet company no less.  I swear I’m not making this up.

Since then, every company I’ve been involved in has been somewhere on this swinging pendulum.   It’s really tricky, because in the search for the right balance of process that’s not too restrictive, I’ve found that the pendulum invariably swings too far, and then has to be brought back.

I’ve always liked that Steve Jobs’ quote, “it’s more fun to be a pirate than to join the navy”.  But what do you do when the pirate ship grows to the size and complexity of a navy ship?  How do you keep small even as you grow big? 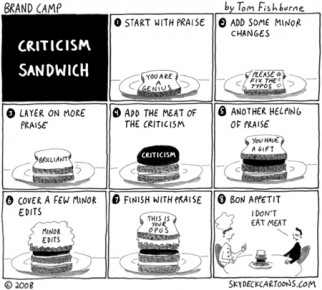 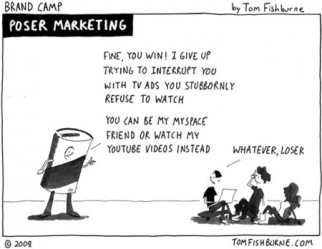