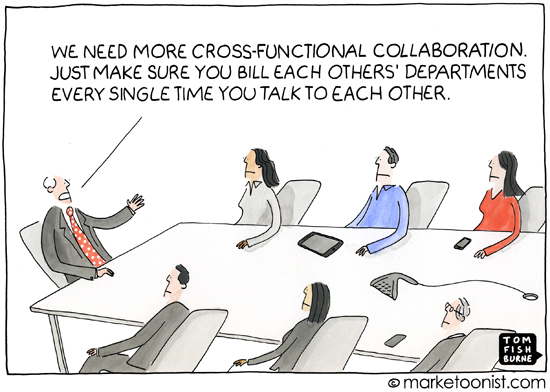 This cartoon came out of a conversation with a marketer recently about the silos in her company. Her company was trying to encourage more collaboration across teams and divisions. They wrote values statements and held off-sites on the importance of cross-functional collaboration.

At the same time, in the name of efficiency and cost controls, her company carefully calculated who spent time on which projects to a minute level of detail. That time was then billed back to the department leading the project.

I get the efficiency argument and the difficulty of managing limited resources. But this company’s cost center emphasis ultimately created a reluctance for different groups to talk to each other at all. People were required to financially justify resources before even scheduling a meeting. So, the path of least resistance became not to invite anyone. And the silos only became more established.

Overcoming silos is universal business challenge. Years ago I worked in a business where the marketing team was based in Oakland, California and the R&D center was based in Bakersfield. There was no easy way to travel between the two offices. The best option was a 4-hour one-way drive. So, in most cases, we relied on conference calls to communicate. But no matter how we tried, that 4-hour drive created a chasm of misunderstandings that negatively impacted projects.

I often drove 4 hours one-way for a two-hour meeting in an attempt to narrow that chasm. My managers would frequently challenge me on the value of investing so much time in the car just to meet face to face. But I found that our projects invariably went smoother when I did.

As companies optimize resource costs, it’s important to factor in the cost of not collaborating. I’d love to hear your thoughts on overcoming silo thinking. 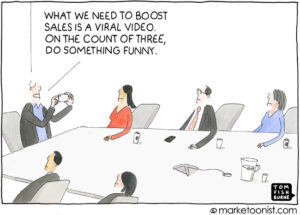 engage with the brand 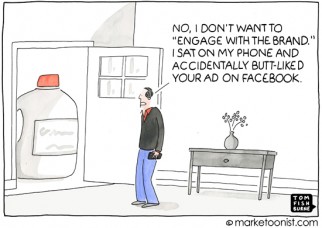