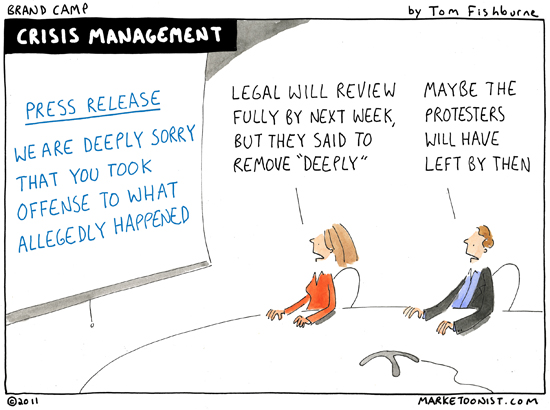 Crisis management may not be one of the 4 Ps, but it is every much a part of marketing. How a company deals with a crisis is a far greater litmus test for the brand than how it executes an advertising campaign.

Yet often the loudest voice in the midst of a crisis is legal.  Sure, a legal liability assessment is important.  But, unchecked, a legal bias can lead to keeping too silent in a crisis, not admitting mistakes, and not showing empathy, the perfect storm for a PR disaster.

2010 was the year of crisis management, with BP, Toyota, and Goldman Sachs all botching PR in the midst of a crisis.  The New York Times profiled the 3 fiascos in a cautionary tale: “In Case of Emergency: What not to do.”

My very first week at Harvard Business School, we were taught J&J CEO James Burke’s response to the 1982 Tylenol poisoning.  He overruled the counsel of his lawyers and went on Donahue to talk directly to angry parents.  In the class, the professor read a particularly tough parent question from that Donahue show and cold-called students to answer it.  One by one, we all fumbled and defaulted to the familiar pat corporate-speak responses.  She then read James’ real response and it struck me how empathetic and human it was.

The Tylenol case is a classic for a reason.  Only by setting aside concerns of liability was Tylenol able to save its reputation.

As marketers, most of us won’t face crises at the same magnitude of a BP or a Tylenol poisoning.  But we will see smaller ones at a far greater frequency than ever before.  In a social media world, screw-ups spread instantaneously (and anything that smacks of spin doctoring is ridiculed).  And as a friend in PR told me, these crises usually happen on a Friday afternoon when everyone’s already left for the weekend. As marketers, how we address these crises says everything about the brand.

When I first moved to the UK, beloved smoothie brand Innocent Drinks made the controversial decision to sell their smoothies in McDonalds. “Not so innocent” ran the headlines and critics charged that the founders had sold out their ethical beliefs. Rather than dodge the issue, Innocent hosted the whole contentious discussion publicly on their blog: “To Burger or Not To Burger“. They didn’t edit comments and encouraged all points of view, good, bad, and ugly. Whether or not you agreed with their decision, you couldn’t help but respect how they handled it. It said a lot about the brand.  And, if Innocent hadn’t hosted the conversation, the conversation would still have happened.

I’d love to hear any illustrative examples you know (positive or negative) for how businesses have handled crisis management.

In a business, everyone works in marketing, even the lawyers. 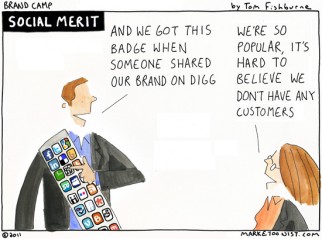 news of the brand