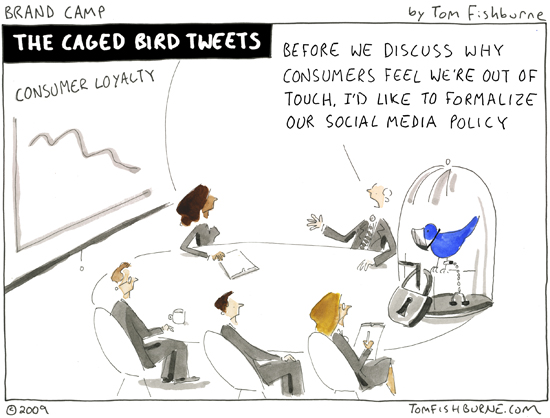 I found an interesting study about social media in the workplace, called “Whistle but don’t tweet at work.” The poll reports that 54% of companies ban social networking entirely, even for business purposes.

Organizations are clearly struggling how to address social media. Many start with the premise of social media as a threat, rather than an opportunity. The emphasis is on limiting liability, often with Draconian command-and-control policies (like the muzzle and cage in this cartoon).

Counter that approach with what a recent Harvard Business post advocates as “The Über-Connected Organization”. It gives some good pointers on how to embrace social media within an organization. Large companies like IBM and Toshiba are connecting employees globally and driving mass collaboration through social media tools.

Yet, the corporate social media crackdown is hamstringing those types of meaningful interactions. These new policies are bolstering the “Corporate Firewall” I cartooned a few months ago.

It’s time to tear down that wall. It’s time to acknowledge that the command-and-control model no longer works. It’s time to encourage the organization to engage more freely with the outside world.

Time is far better spent there than on devising over-protective social media policies. 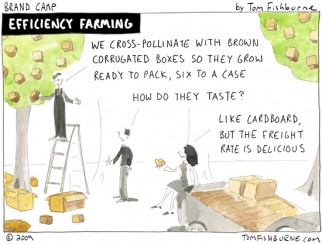 driving by the rear view mirror 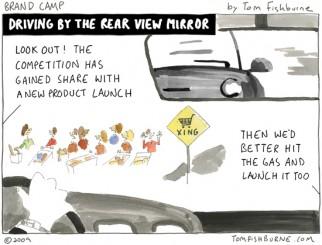