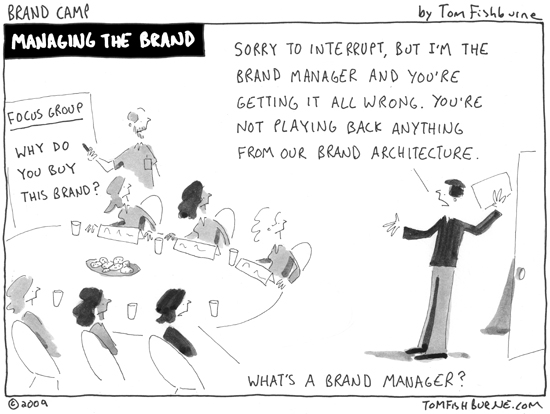 In the last two weeks, there’s been a lot of chatter about the role of the “brand manager” and marketing organizations generally, after Jack Neff at Ad Age previewed a Forrester research report in an article called “Why it’s time to do away with the brand manager.”

“Managing a brand has always been a slightly odd concept, given that consumers are the real arbiters of brand meaning, and it’s become increasingly outmoded in today’s two-way world. That’s why a new report is going to recommend changing the name “brand manager” to “brand advocate,” and fundamentally changing marketer organizations in response to the onset of the digital age.”

These musings on the role of brand manager inspired this cartoon. The role of “brand manager” implies a certain level of power and control. From inside the marketing ivory tower, it’s easy to see yourself as a puppeteer for the brand. Ultimately, though, it’s the consumers who determine what your brand means.

Think about Stella Artois. For years, the beer carried an advertising slogan of “Reassuringly Expensive”. Yet, in the UK, the common slang nickname for the beer is “wife beater” (because of its high alcohol content). Patrons are even known to order a “wife beater” for short in the pub. Years of marketing position statements and heavy advertising couldn’t shake the nickname that consumers gave the beer. Stella finally dropped the “Reassuringly Expensive” slogan in 2007 and are the in the midst of repositioning themselves, including the launch of a lower strength beer to try to counter the meaning attributed by consumers.

It’s important to remember that most consumers have probably never even heard the term “brand manager” yet alone think about the brand in the same way that marketers do.

Rather than draft brand positioning statements in language that has meaning for other marketers, how inspiring it would be to talk in terms than real consumers can understand. Better still, to turn it into a actual two-way conversation with consumers.

At the DO Lectures last month, Duke Stump gave a remarkable talk about creating something he called “bonfire brands.” In his first day as CMO at Seventh Generation, he addressed the office and said:

“I don’t know anything about marketing or branding. Here’s what I do believe. The purpose of what we’re here for is to optimize the resonance and relevance for those we serve. That’s how I hold this whole term of marketing. What’s really going to make us great is if we create a bonfire brand. A brand that people are actually drawn to. Where there’s a conversation. And they’re partaking in your conversation. They’re evangelists for your brand. They’ll defend your brand. They’re also your most ardent critics. It’s a beautiful thing when you can sit around a campfire with those you serve and they can tell you everything that’s great and everything that’s not so great. Instead of holding it as a brand, hold it as a bonfire.” 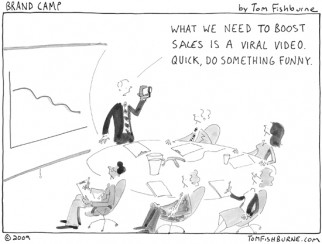 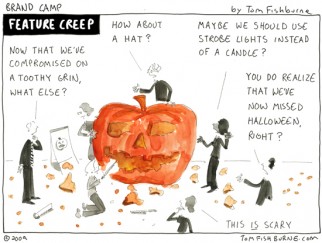