I've been thinking about how the recession is sinking into the collective business psyche. It feels like we're all going through some form of the Kübler-Ross stages of grief (which I like using as a cartoon setup).

I've been struck by the resurgence of WWII-era propaganda, like the vintage "Keep Calm and Carry On" poster that suddenly appeared everywhere. I've recently spotted the two clever parodies to the right.

My favorite is "Get Excited & Make Things", created by Matt Jones.  I like this message because it doesn't dwell on the sky falling, which feels so counter-productive. Instead, it focuses on looking for opportunities, even in the midst of the storm. It implies opportunities made possible even because of the storm.

I met Matt at the DO Lectures last year when he gave a remarkable talk alongside Russell Davies.  He ended up donating this design to howies to put on a t-shirt to help fund next year's DO Lectures.  It became their fastest selling t-shirt ever and even spawned its own Flickr group.  Which essentially proves its own point.  The mindset of "Get Excited & Make Things" is contagious. 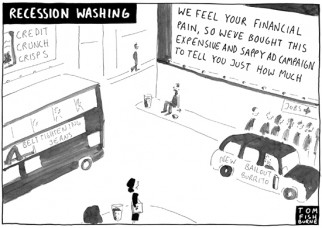 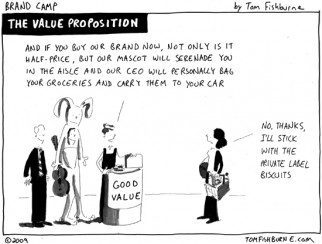