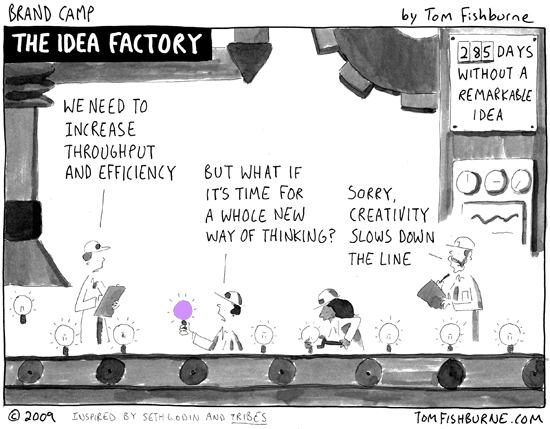 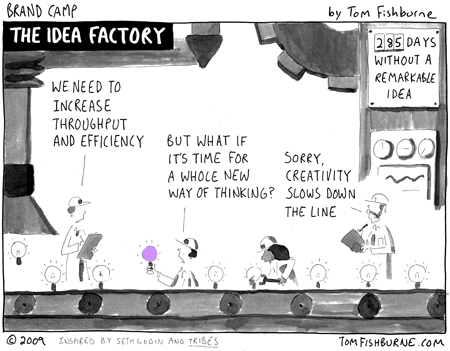 This cartoon isn't a critique of factories per se.  Some of the sharpest people I've ever worked with have been factory engineers.

Instead, this cartoon is about factory-thinking as a business metaphor.  I just finished Seth Godin's new book on Tribes, where Seth frames the danger of being factory-centric as a business.  Factories are designed to do the same repeatable tasks more efficiently and productively.  Change and risk are strenuously avoided, and everyone follows instructions.  But running the factory more efficiently won't help when the business itself is headed in the wrong direction.

Seth argues that businesses need to embrace tribes, not factories.  Here's an excerpt (which inspired this cartoon):

Three things have happened, pretty much at the same time. All three point to the same (temporarily uncomfortable, but ultimately marvelous) outcome:

So, here we are. We live in a world where we have the leverage to make things happen, the desire to do work we believe in, and a marketplace that is begging us to be remarkable. And, yet, in the middle of these changes, we still get stuck.

Stuck in industries that not only avoid change but actively fight it.

Stuck in fear of what our boss will say, stuck because we’re afraid we’re going to get in trouble.

Most of all, we’re stuck acting like managers or employees, instead of like the leaders we could become. We’re embracing a factory instead of a tribe.

The irony is that all of this fear used to be useful. Fear of change is built into most organisms, because change is the first sign of risk. Fear of change in a huge factory is appropriate when efficiency is the order of the day. Today, though, the fear that used to protect us at work is now our enemy; it’s now the thing standing in the way. Imagine having worked at AOL or a mortgage broker or Sears. It might have been fun for a while, but it’s no fun at all when the factory fades. 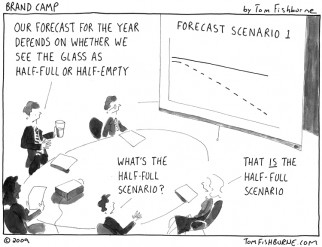 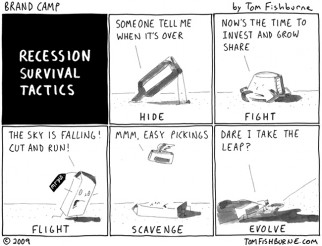