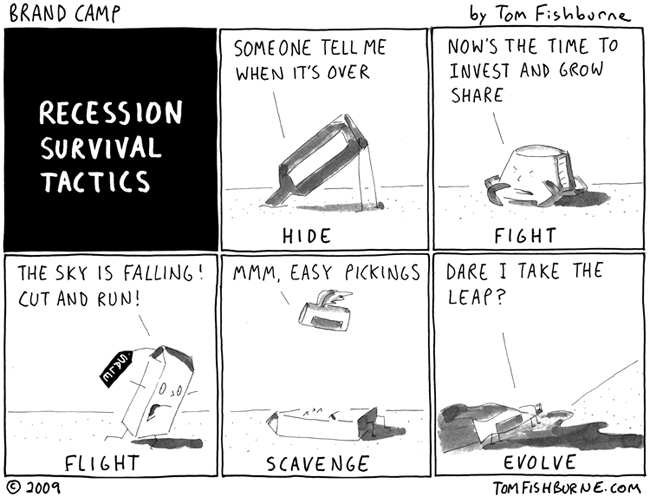 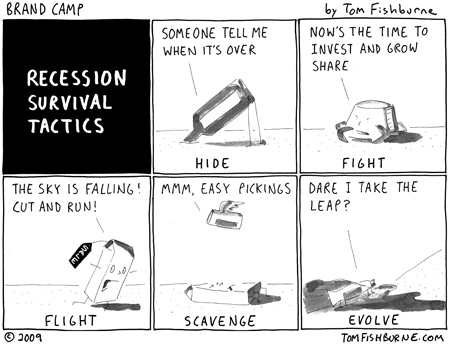 "What we're experiencing right now is a complete sea change requiring us to completely rethink what were doing. We need to think our way out of this recession, not just wait for it to get better."

I read this quote from Michael Perman (Levi Strauss) in this AdAge article and thought it was spot-on (thanks to Don and Eliza for sharing it).

It was just spark I needed to finish this cartoon.  I had been sketching the general idea since I drew "blend into the herd" early this month, and this quote inspired the closer.

This economic climate feels like a "survival of the fittest" special on Animal Planet.  That thought made me think about businesses as species.

Each of these survival tactics is on full display at the moment.

The ones in greatest jeopardy, I think, are the ones in flight.  The ones panicking and throwing out the baby with the bathwater.  Cutting all innovation.  Discounting like drunken sailors.  Some of this is emergency triage.  Some of this is overdue pruning.  But some of this feels like a kamikaze run without any regard for the future.

Five or ten years from now, how will we look back on this time?  As bleak as this economy is, I imagine that there will be companies that will have excelled because of the sea change, not in spite of it.  Some will leverage inherent competitive advantages (like McDonalds). But I think many will be current businesses that fundamentally adapted in this new climate.  They will have figured out how to make due with less.  To think creatively about old problems.  To see opportunities in the storm.

These businesses will have realized that the risk of doing the same old thing is greater than the risk of trying something new.

I think the these are the ones that will lead us out of this recession.  It certainly won't be Chicken Little. 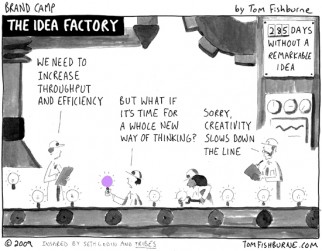 the paradox of thrift 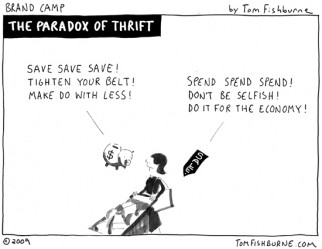