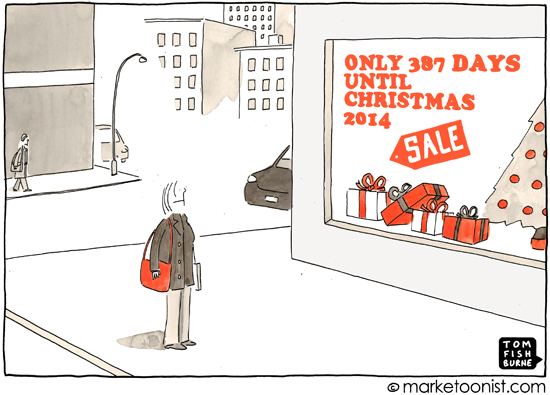 It’s only a matter of time before holiday deals start lapping themselves.

Increasingly retailers are embracing Christmas Creep. This year’s pressure intensified in the US with six fewer selling days between Thanksgiving and Christmas. Black Friday started a week early for Walmart and many retailers started deals in the midst of Thanksgiving itself.

Last year’s cartoon and post on Christmas Creep sparked an interesting debate in the comments. Bill Carlson noted that 40% of consumers started their holiday shopping in September/October, so it’s only logical that retailers start holiday communication early. Many others focused on the risk of consumer backlash.

Russell noted that “This does create an opportunity for someone creative. Deliberately have a campaign that pokes fun at this. Drive home the message of ‘Strawberries in Summer, not Winter”. Commit to keeping store promotions genuinely seasonal. Advertising that you are not doing Christmas in October gets you attention and differentiation.”

I was struck that several retailers took exactly this opportunity to take a stand this year. Regional electronics chain P.C. Richard & Son took out full-page “Save Thanksgiving” ads. Nordstrom kept stores closed and announced, “We won’t be decking our halls” until Black Friday because “we just like the idea of celebrating one holiday at a time.”

It will be interesting to see how the Christmas Creep bandwagon continues in coming years, as retailers navigate the holiday shopping pressure and balance how best to listen to their consumers. Some consumers genuinely want deals earlier in the year. Others see it as an invasion. I imagine the best approach will be different for every retailer. What might work for Kmart won’t necessarily work for Neiman Marcus.

I’d love to hear your insights on how marketers should respond to Christmas Creep. 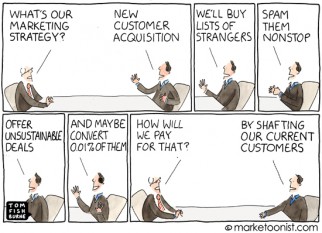 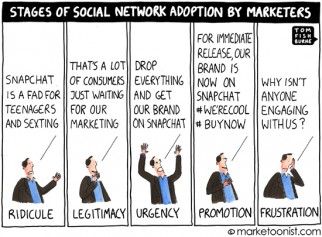