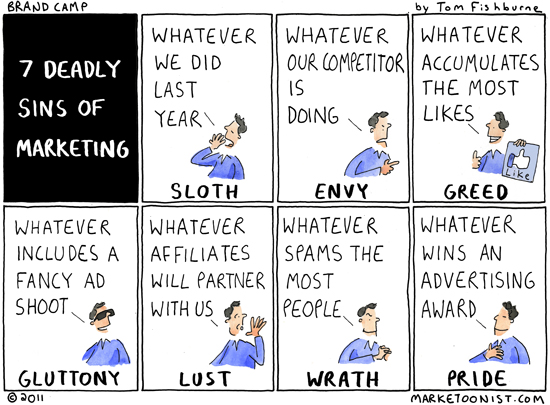 This cartoon was partly inspired by a small irreverent San Francisco clothing company called Betabrand.  They compete against far larger fashion companies and can’t win on traditional media spending, so they are forced to do things differently.

On Thanksgiving last year, Betabrand created the very funny Gluttony Pants, launched to “honor the rich American tradition of overindulgence.” It includes three buttons for waistline expansion during the Thanksgiving meal and comes with its own napkin. Betabrand didn’t have a traditional marketing budget, but the Gluttony Pants inspired Conan O’Brien to talk about them in his monologue that week.

From the success of the Gluttony Pants, Betabrand ultimately launched pants for the other seven deadly sins: Envy, Wrath, Lust, Sloth, Greed, and Vanity. My favorite is Envy, where they created one and only one pair and sold it by auction so that the rest of us have to envy the winning bidder.

It’s this type of marketing that people talk about (and helped propel Betabrand from a bootstrapped startup making horizontal “Cordarounds” to a clothing brand with a couple million dollars in sales). Founder Chris Lindland describes their business as “99% fiction and 1% fashion”. They launch a new product every single week, each telling a story worth sharing and requiring no traditional media.

Betabrand thrives by exploiting the Achilles heels (and deadly sins) of brands with greater resources and marketing budgets.  When you’re a little brand, you can’t afford to do whatever you did last year or whatever your competitor is doing.  However, there’s nothing stopping larger established brands from being equally creative and looking beyond the deadly sins of marketing.  You can think like David, even within Goliath.

I’d love to hear your thoughts on the deadliest sins of marketing. 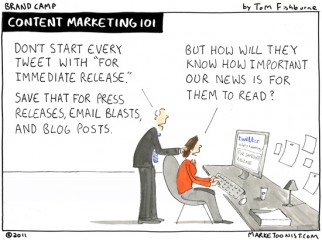 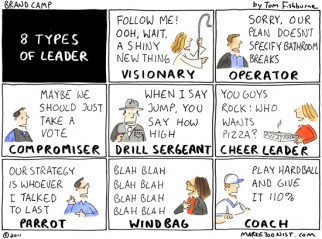