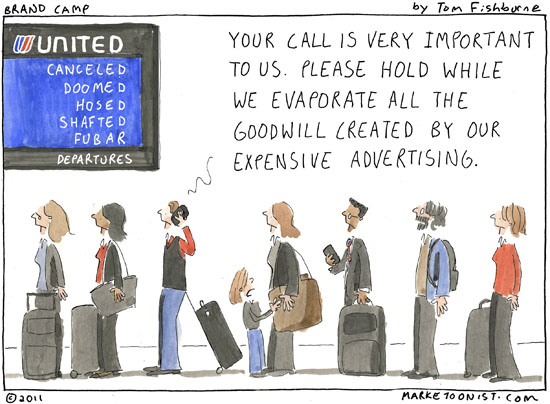 I sketched this cartoon while on hold with United Airlines last week. I spent a total of two hours and 12 minutes with United over four separate phone calls trying to get home from New York after the storm, so I had a lot of time to think about service.

Many brands fall down on service. They view it as a cost center. Yet, all the marketing dollars invested in animated TV ads and direct mail mail pieces can be evaporated by a couple bad service experiences.

Marketers dream of having a captive consumer audience. Most brands struggle for attention. United had two hours and 12 minutes of my time. I was captive all right. But as I listened to the George Gershwin United theme song over and over again, I had time to think about all of my frustrations with United (and question just how much that Premier Executive frequent flyer status was worth it).

Of course, bad weather isn’t United’s fault. But, dealing with the aftermath of bad weather is simply part of being an airline. Excelling at resolving situations when things go wrong is part of how any brand is judged.

A few years ago, I interviewed with Apple for a marketing role with AppleCare, their service and support plan. At first, I didn’t see how a service plan was even marketing. But then I realized that the moment Apple products break is exactly the moment that Apple proves itself as a brand. The genius at the Genius Bar or the AppleCare phone operator are front-line brand managers. Those experiences directly drive how a consumer feels about a brand, and what stories they share with others.

If you haven’t seen it already, take a look at Dave Carroll’s music video that captures his rough service experience with United. His experience obviously touched a nerve. The video has been seen 9.9 million times and Time Magazine named it the seventh most viral video in 2009. The Times even speculated that the video and bad PR fallout prompted a 10% stock price drop for United. Service is as much a part of marketing as the four Ps. 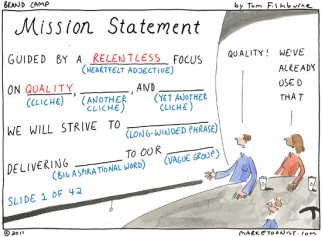 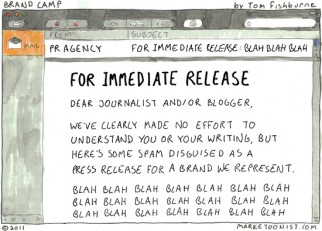