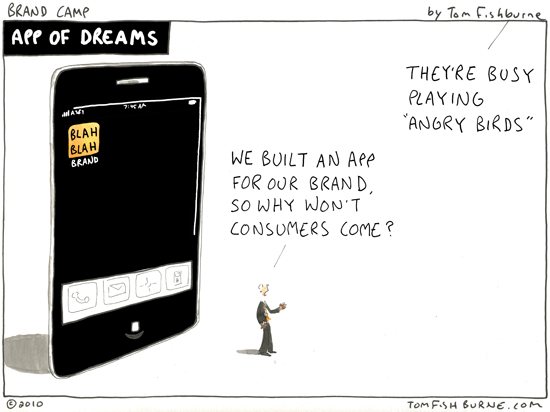 I’ve heard mobile apps described as the new web site. And that having a mobile app is essential to gaining “share of conversation”. There are more than 300,000 mobile apps today on Apple’s platform alone, up from 200,000 just last year. Many of these apps are launched by brands as a new way to reach consumers. Brand owners have taken “there’s an app for that” literally.

Yet, unlike “Field of Dreams”, just because you build it, consumers won’t necessarily come. In fact, with more than 300,000 apps out there, breaking through the app clutter will be at least as competitive as your everyday business.

In the early days of commercial web sites in the mid 90s, many companies launched “brochureware”. These are web sites that simply replicate existing printed promotional materials. A lot of the new mobile apps being launched today are little more than brochureware. They are designed to serve the company, not the audience.

Brochureware won’t break through the app clutter. My friend Sam is working to launch a new app for his business. He said promoting an app is trickier than anything he’s had to promote because he doesn’t have the option of buying traffic to an app to get the word out. He has to rely on the merits and utility of the app to sell itself. So, he’s taking every dollar that he would have spent on promotion and putting it toward making his app more remarkable.

So, if brochureware won’t cut it, how does a brand launch an app with actual utility? Pete Blackshaw argues recently in AdAge that thinking through an app strategy is an exercise that will make your brand stronger, independent of the actual app produced. It forces a brand owner to think about what the brand really stands for:

“The question of “what’s your brand’s app?” opens up a bigger and more foundational question we all need to address as brand owners: Importantly, what’s the fundamental value and benefit our brand brings to the table, even beyond the physical realm? What’s the brand’s reason for being? What core service logically and naturally extends from the core brand proposition? What is our desired brand experience?”

Pete goes on to profile positive examples like The Snow Report from North Face, the definitive source for snow conditions, and SitOrSquat by Charmin, a public restroom finder. Neither of these apps spend time touting product benefits or pitching the brand. They are about the consumers, not the products. Yet they are natural extensions of the brands. And they are undeniably useful to their consumers.

Launching an app for your brand is less like launching a campaign than launching a new product. It’s not for the faint of heart. But it can stretch your brand in powerful directions if you do it right. 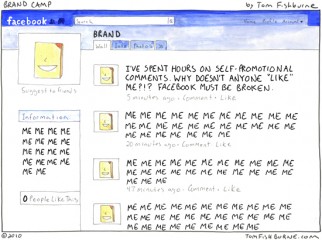 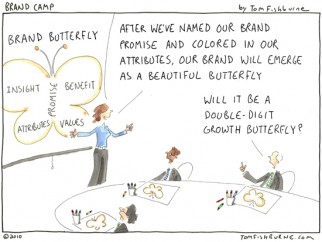