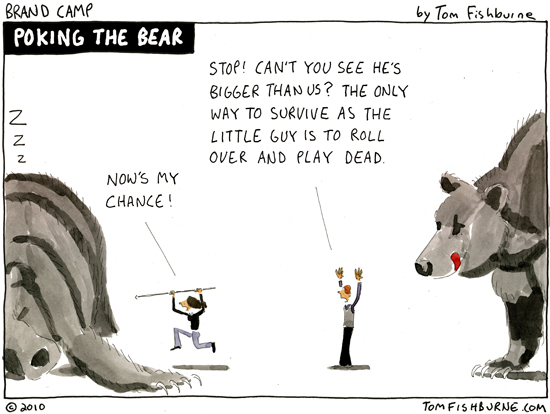 “Poking the Bear” belongs on a marketing lingo bingo card alongside “Low Hanging Fruit” and “Share of Voice”. It’s one of my favorite marketing buzz phrases because it’s so vivid. “Poking the Bear” means going up against a competitive giant knowing the potential response will be massive.

Schwans innovation guy Marc Coudeyre, who I knew at General Mills years ago, suggested “Poking the Bear” could make a good cartoon. He said that companies often cautiously “Yell at the Bear” through soft launches, etc. before they actually work up the courage to poke it.

The most common action that I’ve seen is that organizations are afraid to confront the bear at all, particularly if the bear is a powerful market leader. The phrase “Poking the Bear” is often used as a watchword on what to avoid. If you’re the little guy, the Bear can be pretty intimidating when it throws its weight around.

Many of these companies take the “roll over and play dead” approach, the equivalent of staying under the radar. But this strategy is actually more dangerous. The big competitors hunt indiscriminately and playing it safe actually makes you an easier target.

As the challenger brand, the only way to win is to catch the incumbent off-guard, using your natural advantages of speed and creativity to keep the Bear on its toes.

And the best way to poke the bear is by aiming at the funny bone. Recently Clorox swatted tiny rival method with a cease-and-desist letter for using a daisy image method had been using since 2003 and Clorox started using in 2008. The threat of litigation can be frightening for small companies, and many opt to “roll over and play dead”. Method decided instead to poke the bear back.

They used humor to turn the cease-and-desist letter into a very public campaign called Vote Daisy.

As howies founder David Hieatt said after getting sued by Levis, “you can’t slay a giant but you can help him get his sense of humor back.”

where the creatives are 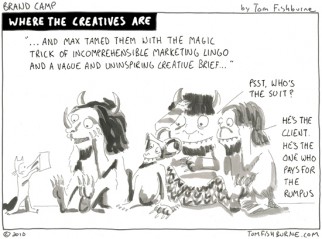 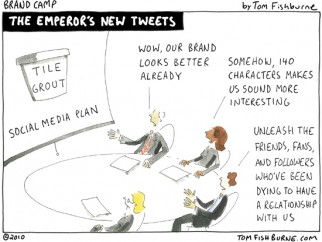