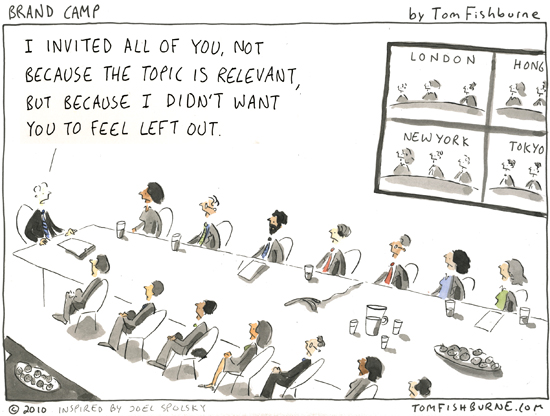 I was struck by a recent Joel Spolsky column in Inc. magazine on dysfunctional communication in growing companies.

“What used to work with three people in a garage all talking to one another about everything just doesn’t work when your head count reaches 10 or 20 people. Everybody who doesn’t need to be in that meeting is killing productivity.”

This counter-intuitive observation highlights a serious business problem: well-intended over-communication. Each additional person needed to keep in the loop exponentially slows down progress.

I’ve struggled with this exact dilemma. Three years ago, I arrived in the UK to help launch the method brand there. At the start, there were three: a sales guy, a supply chain guy, and me. We all knew everything about the business and could practically finish each others’ sentences. Here we are in our first day in the office (we didn’t have a printer yet, hence the sideways laptop). 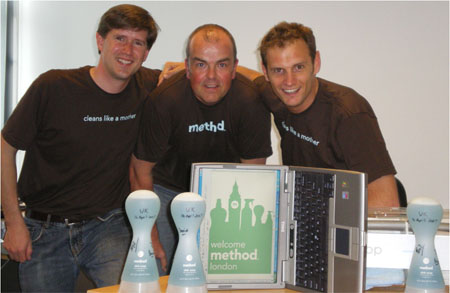 As we grew the team to 10 people and needed to coordinate more with the home office in the US, the lines of communication were stressed. We could no longer have everyone involved in every decision. But, those who weren’t involved felt excluded. We were damned if we did, and damned if we didn’t.

We ultimately realized that democracy in the workplace doesn’t scale. Not everyone can have a voice on every decision. To even try to accommodate everyone results in peace treaties. They slow you down and ultimately sand the edges of what you’re trying to create.

Joel recommends addressing this problem head on: “as the boss, you need to design ways to reduce communications paths.”

This sounds harsh, because it runs counter to etiquette. We intrinsically feel that we need to communicate more to have a healthy office culture. To restrict communication feels impersonal.

Yet, there’s a fine line between etiquette and habit. The accepted code of behavior can actually be what is slowing you down. As you evolve, it’s good to question all of your conventions and decide whether you’re still well-served by what served you before.

Even J&J periodically questions their famous “credo”. CEO James Burke once instructed his executives to either recommit to the company credo or “tear it off the wall”.

It’s a good discipline to continually challenge ourselves what etiquette is making us more successful and what should be torn off the wall. 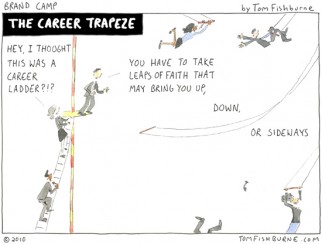 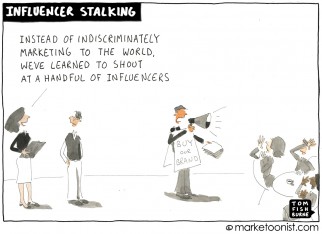