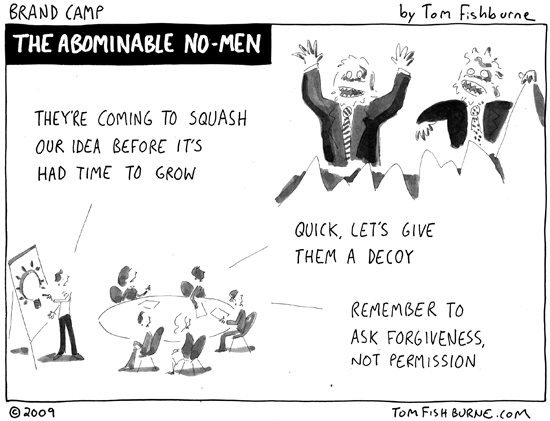 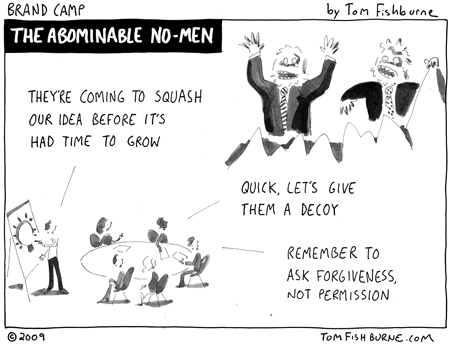 I met Simon Clift a few weeks ago and he introduced me to the wonderful expression, "the abominable no-men".  The longer the corporate ladder, the more people there are to veto or sandpaper an idea.  And the harder becomes to usher an idea through the gauntlet unscathed.

Simon is CMO at Unilever after 25 years there, so he knows all about this tendency in big business.  But he also said that he was working hard to flatten things and push decision-making deeper into the organization.

I later read this article, which quoted Simon at saying, "I'm not allowed near ads anymore.  My job is to make space for people to create great advertising."

This is a refreshing point of view, because it's starting to feel like the age of the "abominable no-men".  In this economic climate, as every organization questions how to do "more with less", the focus turns to the core.  Battening down the hatches means saying "no" a lot.

This means that experimental ideas are harder than ever to get off the ground.  Yet, the urgency for new ideas and an alternate point of view has never been greater.  Business as usual isn't going to cut it for everyone.

This creates a complex situation for anyone trying to launch a provocative idea in this environment.  Guy Kawasaki has some good insight on the "Art of Intrapreneurship", including this nugget that I found useful.

Stay under the radar. Speaking of bozos who got in your way, you need to stay invisible as long as practical. Your initial reaction to an innovative idea may be to seek upper level and peer buy-in (although rebooting your brain should have taken care of this problem.) Not a good idea. Seek forgiveness (if it comes to this), not permission. As soon as you appear on the radar the flak will start flying. Let the vice-presidents come to you. When they appear and start suggesting new product, that’s the time to tell then you’re already working on it. Even better: make them believe it was their idea.

If this is the age of the "abominable no-men", I think this will also be the age of the "intrapreneur" who figures out how to persevere against the odds and avoid the "death by a thousand cuts" in the cartoon below.  The path has never been more challenging, but the stakes have never been higher. 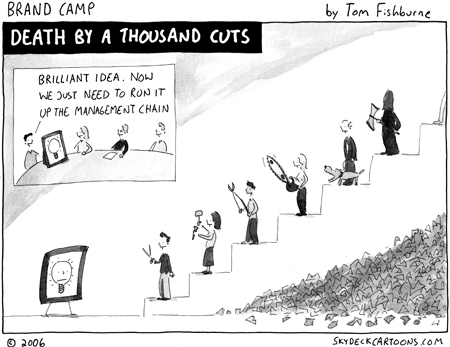 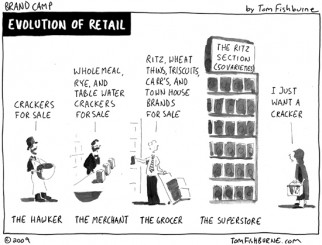 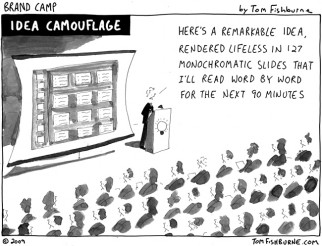