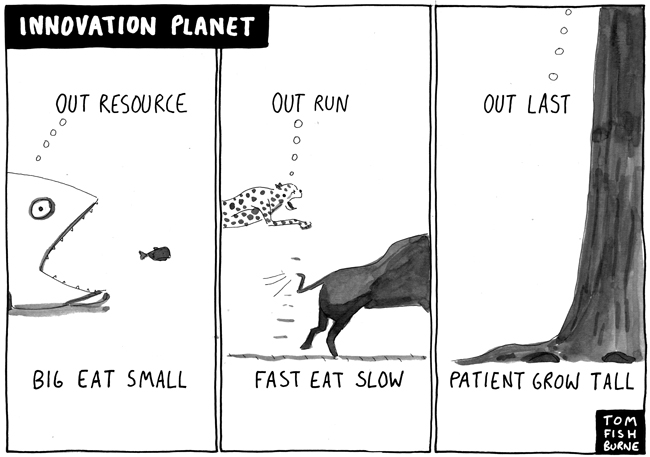 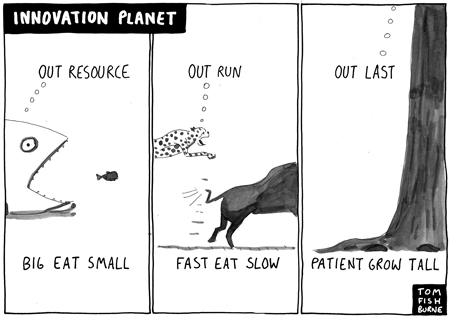 I've been thinking lately about the entrepreneurial anthem, "it's not the big that eat the small, it's the fast that eat the slow."

I once did a field study with Fast Company magazine, which epitomized that sentiment.  It was a year after the dot-com bubble popped, and they were facing a big identity crisis.  They had been the quintessential handbook for the go-go late 90's after all.

As part of the project, we interviewed 50 or so readers of the magazine.  Most of the discussions turned up war stories from the late 90's around the dark side of "fast for fast sake".  Rushing ideas, growing too soon too quickly, taking on too many outside investors, losing control, etc.

A sense of urgency is important, but so is a sense of patience.

I recently had an inspiring conversation with Will Rosenzweig, who started The Republic of Tea, among other things.  He said, "it took 18 years to become an overnight success".

It reminded me of a story that Dave Hieatt, founder of howies, likes to share about his conversation with Yvon Chouinard, founder of Patagonia.  He asked Yvon how he possibly managed to keep control of his company, and Yvon replied, "50 years of hard work."

There are times to put the pedal down, particularly if you're up against Goliath.  But there is value in taking things slow and steady to get things right first.  And to remember the long haul, not the short sprint.

Russell Davies has touched on this theme recently in his essays on slow projects:

Not long ago the idea of a slow project would have horrified me; where's the nimbleness, the agility?  But now I'm thinking that for some projects slow is both unavoidable and good (like slow cooking).

It's unavoidable because these are the kind of projects you do with your friends, because you want to. Money is involved but only as a lubricant, not as the point of doing it, so these projects are cheap. And you're only doing them because you want them to be really good, that's the point. And that means the awesome logic of the fast/cheap/good trio swings into place – dictating that if something's going to be both cheap and good it can't also be fast. And of course it can't be fast, because these are projects done in evenings and weekends, in people's own time.

So you learn patience, and you realise that those long pauses are opportunities for reflection and that extra goodness might result from all that extra mulling, from stepping away for a while. The excitement and energy of a headlong sprint to execution is addictive and it can get a lot done, it's mostly what my working life has been about. But I'm enjoying the slow way, it's almost like craft. 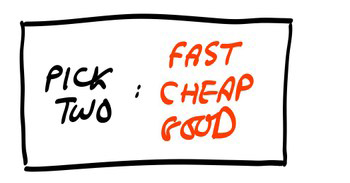 I think this is a good year to stir the slow cooker. 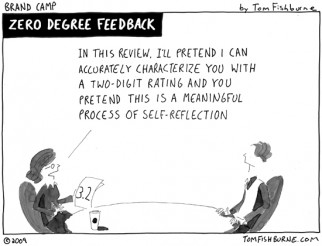 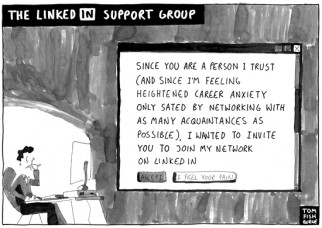