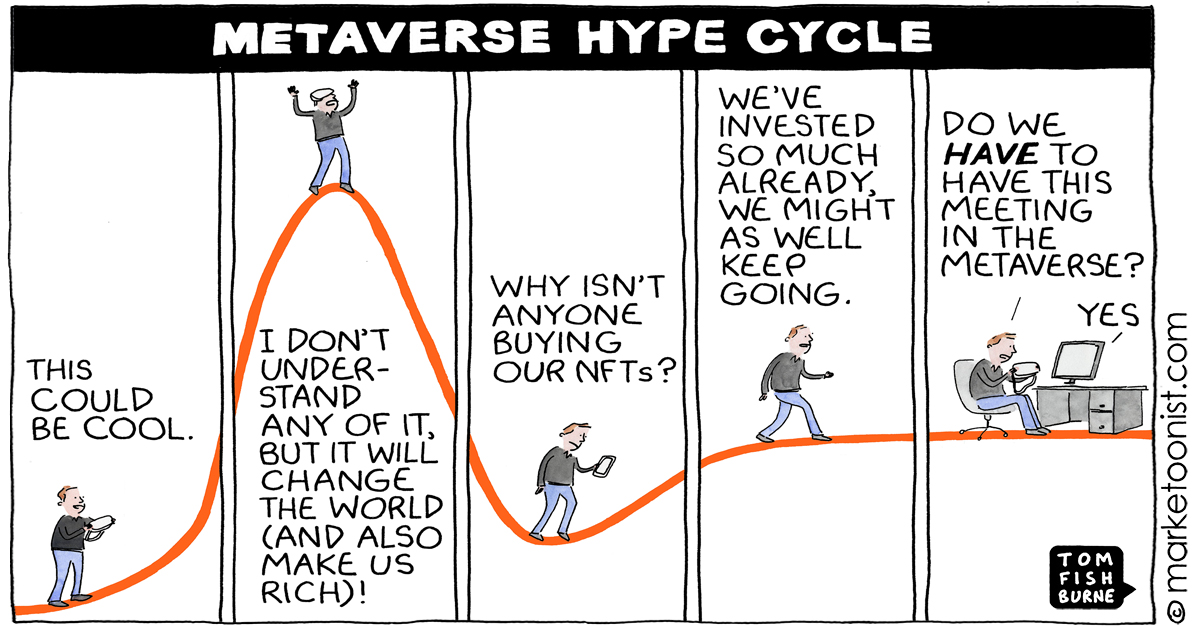 Gartner has been mapping the Hype Cycles of emerging technologies for nearly 30 years.  Jackie Fenn (still at Gartner) originated the widely-used Hype Cycle Methodology in 1995.  She later described the Hype Cycle this way:

“There’s a backlash until somebody gets it right, often Apple, and then mass adoption.”

The Hype Cycle is more subjective than scientific, and has been been criticized for implying that all overhyped technologies eventually find a market.  But it provides an interesting glimpse into how technology is perceived in a particular moment in time.  And it can help sense-check the level of hype when gauging if, when, and how to get involved.

I stumbled across a collection of every annual Gartner Hype Cycle from 1995 to 2020.  In 1995, I found it interesting to see that “Wireless Communications” and “Information Superhighway” near the “Peak of Inflated Expectations” and “Virtual Reality” and “Video Conferencing” were on their way to the “Trough of Disillusionment.”

Gartner hasn’t officially mapped the Metaverse, but they pegged NFTs right at the “Peak of Inflated Expectations” in August 2021.

Elon Musk recently panned the Metaverse in an interview as “more marketing than reality” and said “I don’t get it”:

“Am I like one of those people who was dismissing the internet in ‘95 as some fad or something that’s never going to amount to anything?…

“Sure you can put a TV on your nose. I’m not sure that makes you ‘in the metaverse. I don’t see someone strapping a frigging screen to their face all day and not wanting to ever leave. That seems — no way…

“I currently am unable to see a compelling metaverse situation.”

A Morning Consult survey last Fall found that 68% of adults were “not interested” in the concept of the Metaverse, even as Meta (formerly Facebook) invested $4.2 billion into Metaverse technology in just the last 3 months of 2021.

There’s a funny video clip circulating right now of David Letterman interviewing Bill Gates in 1995 about the Internet.  This was around the time that Gartner mapped “Information Superhighway” near the “Peak of Inflated Expectations”.

David Letterman: I can remember a couple of months ago there was a big breakthrough announcement that on the internet, or on some computer deal, they were going to broadcast a baseball game. You could listen to a baseball game on your computer. And I just thought to myself, does radio ring a bell?

David Letterman: What is the difference?

Bill Gates: You can listen to the baseball game whenever you want, too.

David Letterman: Oh, I see. So it’s stored in one of your memory deals and then you can come back and a year later —

Bill Gates: Exactly. That’s the RAM that we talked about earlier.

The exchange captures two voices that often come up with any new technology — the skeptic who doesn’t see the value and the the evangelist who struggles to explain what the big deal is.

Here are a few related cartoons I’ve drawn over the years (including an old one from 2007 I drew on Geoffrey Moore’s famous (and kind of related) “Crossing the Chasm” model of new product adoption): 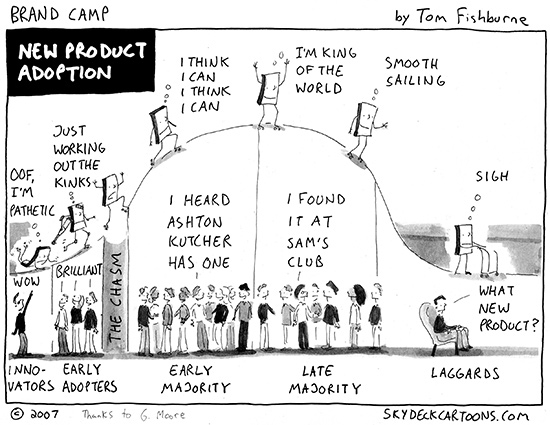 brand experience and the metaverse - January 2022 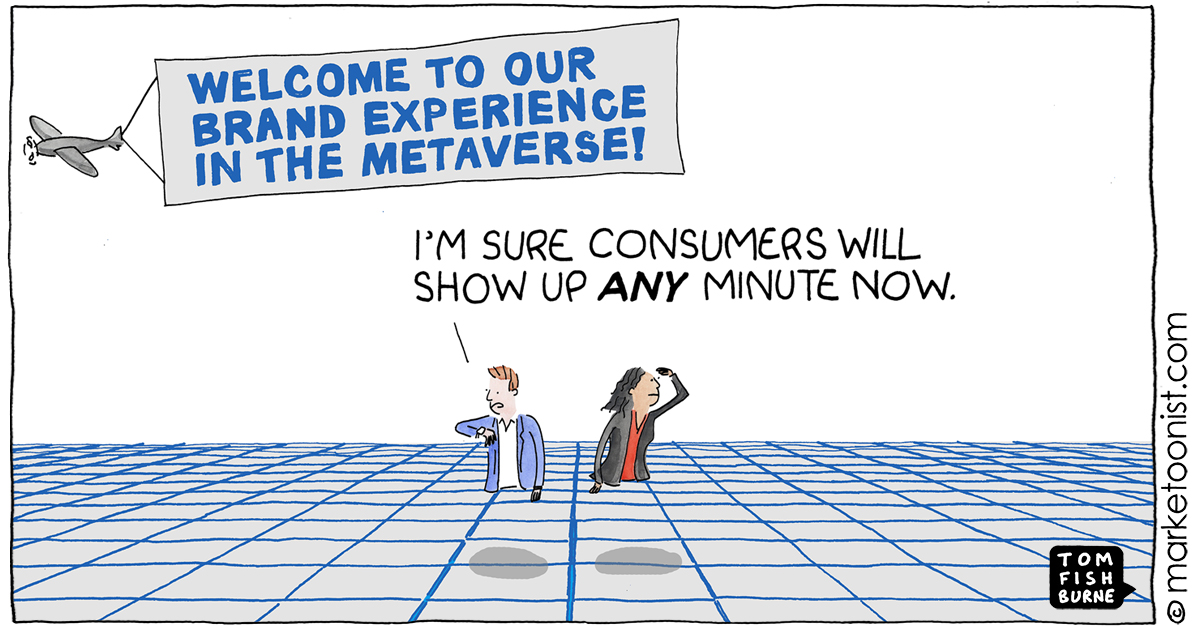 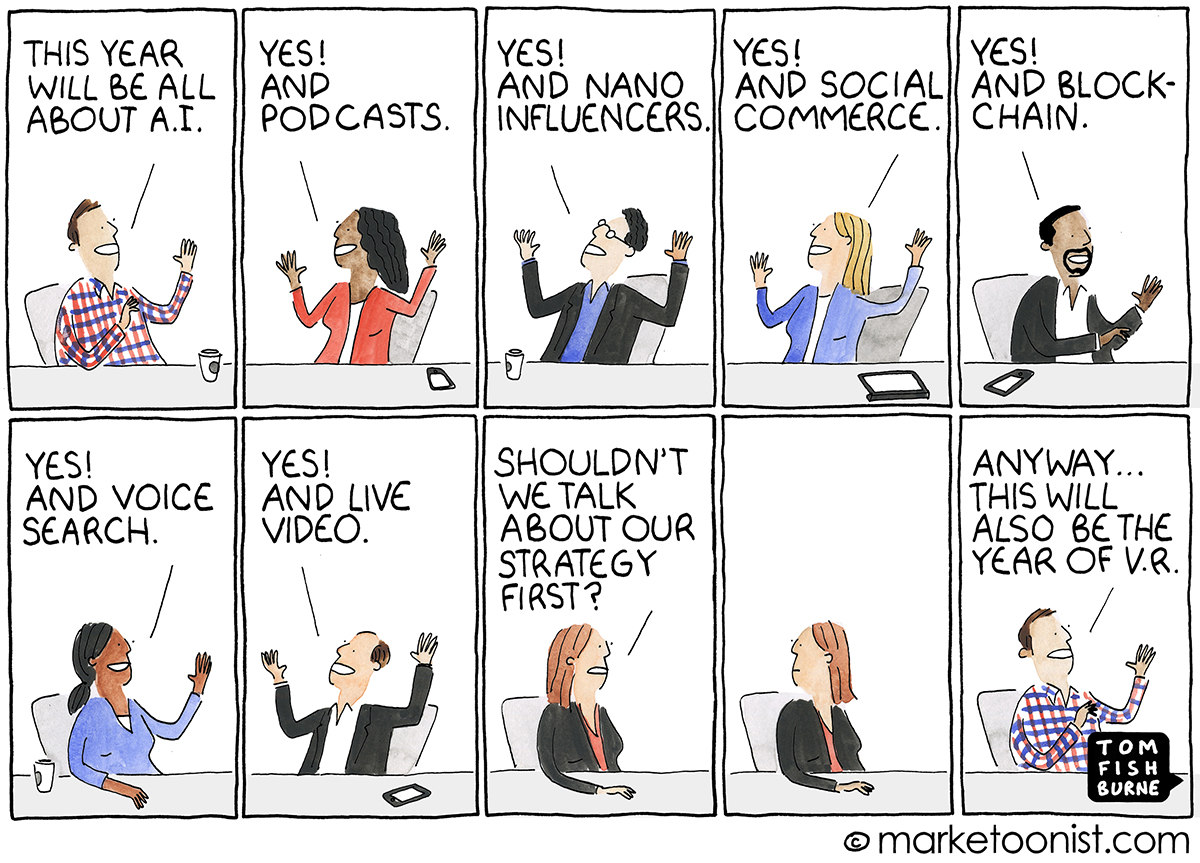 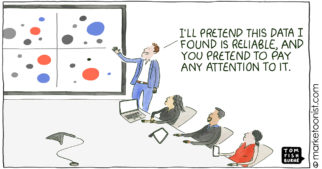