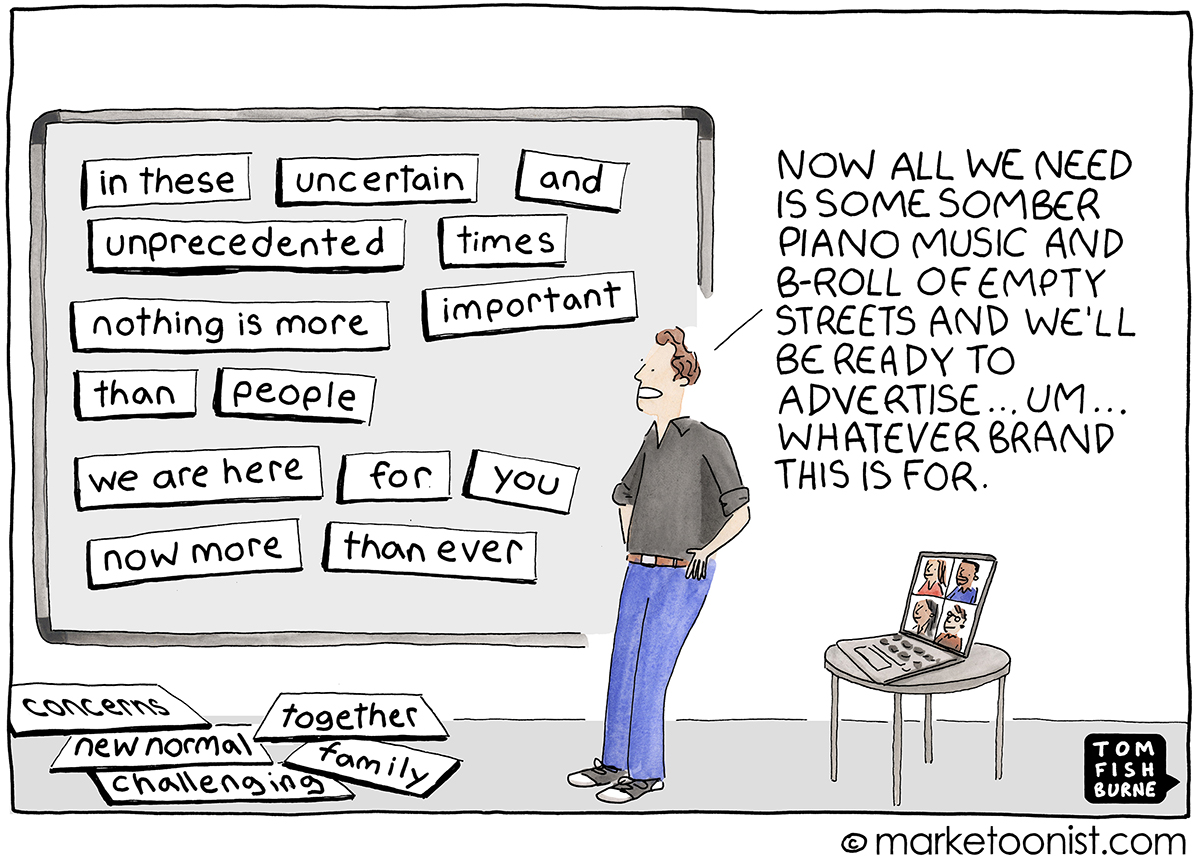 Someone named Microsoft Sam recently compiled a selection of current advertisements into one three-minute montage titled: “Every Covid-19 Commercial is Exactly the Same.”  The video highlights eerily similar copy, music, and visuals across all the ads, spanning automotive to tech to retail.

As Microsoft Sam observed in the video liner notes:

“Since they can’t film a new ad because of social distancing, they compiled old stock b-roll footage and found the most inoffensive royalty-free piano track they could find.

“This, combined with a decade of marketing trends dictated by focus groups and design-by-committee, released a tsunami of derivative, cliche ads all within a week of one another. It’s not a conspiracy – but perhaps a sign that it’s time for something new.”

I think that’s true for all types of brand communication right now.  The path of least resistance is to follow the same formulaic playbook.  But when every brand is following that same playbook, maybe it’s time to question the playbook.

For example, one piece of generic marketing advice I keep reading is “better too serious than sorry,” as if using any form of humor is completely inappropriate right now.

But I think for many brands (and people), a sense of humor is more important than ever.  A shared sense of humor can be one of the best way to connect.  And any form of humor that works requires empathy, which is particularly important now.

I’ve been on the look-out for brands that are successfully and tastefully finding ways to use their sense of humor.  At the big brand level, I like how Budweiser re-imagined their iconic 1999 “Whassup” ad, but this time re-framed to connect with each other while staying at home.  I also liked how Burger King is saluting “Couch Potatriots.”

One of my favorite examples is a challenger brand in the UK called Emily Crisps.  Back in December, they planned their first outdoor ad campaign, to appear in London in April when more people are usually outside.  It seemed like a good idea at the time.  But with everyone in lockdown, things obviously changed.

Rather than pull the campaign, Emily Crisps decided to approach the situation with a self-deprecating sense of humor. Three of their ads read:

“Our first ever poster, seen by a runner and one pigeon. Typical.”

“Do an ad when it’s warmer, they said. More people will see it, they said.”

“Hmmm… maybe we should have made a TV ad instead.”

The campaign generated even more attention than usual in other channels, such as press and online. Adam Draper, managing director of Nurture Brands which owns Emily Crisps, said the campaign is working “because it’s so relevant and it’s of the moment and it’s having a bit of fun. People want a bit of humour right now and that’s what will allow this campaign to resonate.”

I think this is good time for brand teams to rediscover their own distinctive voices.  Brands ultimately need to write their own playbooks.

“How Not to Communicate Right Now” March 2020 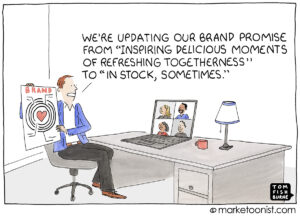 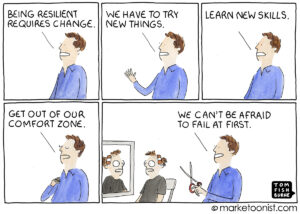