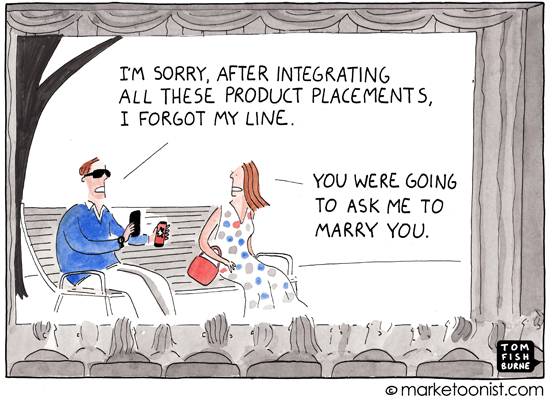 Product placement has been around since the early days of entertainment, but it feels like we’re in an awkward adolescent period, weird growth spurts and all. As the entire nature of entertainment shifts and viewers can more easily tune out commercial breaks, marketers are leaping more than ever into the shows themselves.

Sometimes the results are really obnoxious, like this Bones episode where the characters literally pause a murder investigation to marvel at the parking feature of their Toyota.

In other cases, the brands can help add to the story line. There’s a good Adweek article last week on how reality shows like RuPaul’s Drag Race integrated Las Vegas Convention & Visitors Authority and Absolut Vodka.

When I worked on the Haagen-Dazs brand 10 years ago, we dabbled in product placement and product integration. We had a product placement retainer to proactively place ice cream containers in TV shows and movies. Our product placement agency used an elaborate media calculation for the value of those impressions: length of time on screen, how integral the product was to the scene, how much of the logo you could see, etc. It got to be pretty ridiculous. I remember they put a quantified media value against a split-second cut of Cameron Diaz opening a freezer, and if you paused the movie, you could briefly see the burgundy package color of a Haagen-Dazs pint.

But then we had a chance to pitch a reality show to the Food Network to create the next Haagen-Dazs ice cream flavor. We put together a whole contest with video submissions from contestants, flew the finalists to our R&D lab to make flavors by hand, and had panels of judges narrow down the winning flavor, which we launched as our next flavor. The Food Network liked the idea so much, they expanded our pitch from a one-hour to a two-hour special, and they didn’t charge Haagen-Dazs anything because they saw it as a show, not an infomercial. They ran the final show over 10 times and it had a huge impact on the brand.

I remember in the midst of filming that my marketing instincts sometimes got in the way of telling the story. We had marketing signage with huge scoops of ice cream with our marketing tagline that I kept trying to drag into the background of the shots. At one point, the producer pulled me aside and told me I had to know when to stop marketing.

Storytelling is all the rage, but marketers are not naturally great at storytelling. Sometimes we have to learn when to stop marketing.

It will be interesting to watch how product placement evolves. I’d love to hear your thoughts. 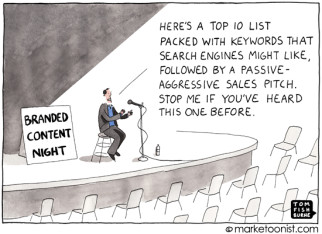 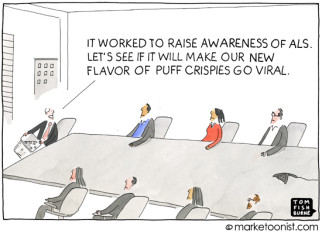