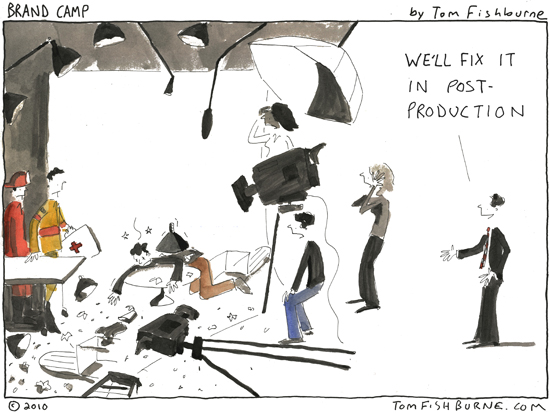 If you’re ever on a video shoot, you’ll no doubt hear someone say, “we’ll fix it in post-production”.  This usually happens toward the end of a long day, when everyone is tired and there’s a sticking point preventing everyone from going home.  Sometimes the client hasn’t seen what they’re looking for.  Sometimes there’s a stalemate on art direction. The promise to fix “in post-production” allows everyone to break and address the problem later.

But it’s usually an empty promise.  Post-production isn’t a magic wand.  It can fine-tune, but it can’t resolve fundamental differences of opinion.  It also can’t fix massive mistakes. When there’s a real sticking point, it’s better to buck up, make another pot of coffee, and do another take.

Contrast that approach with this 2003 Honda advert, Cog.  It’s a 2-minute advert where disassembled pieces of a Honda Accord are laid out on a floor and an elaborate chain reaction is set in motion by one transmission bearing.  What’s particularly stunning is that the team forced themselves to make the ad in two uninterrupted 60-second takes, without CGI.  This required accuracy to a 16th of an inch and they had to overcome changes in ambient temperature and settling dust.  It took 90 minutes just to get the first transmission bearing to roll correctly into the second.  The whole piece required 606 takes, but the result is pure magic.

This ad wouldn’t have been nearly so remarkable had they faked it.  Partly as a result of their exacting discipline to get it right on set, this Honda ad received more awards than any commercial in history.

In a general sense, businesses often operate as if there is post-production to rely on. There is a manufactured wall between how a business operates internally and how it is designed to be seen by the outside world.

I once heard someone say that working in the best businesses was like working on live TV. There’s no opportunity for post-production so you’d better be authentic the first time around. Remarkable things happen on live TV. The best brands brand from the inside out. And consumers are increasingly savvy enough to figure out the difference. 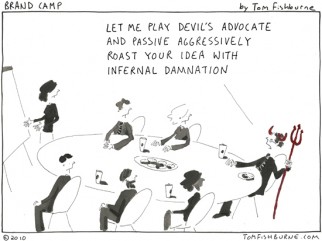