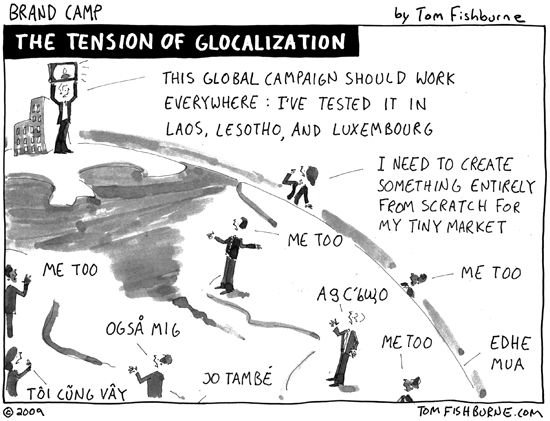 I’ve thought a lot about “thinking global, acting local” since I moved to the UK to help launch an American brand two years ago.

It’s a constant tug-o-war between global consistency and local adaptation.  Recently, I had coffee with Patrick Cairns, CEO of Plum Baby, who spent a lot of time in global roles with Unilever.  He described the standard dichotomy as being either “mindlessly global” or “hopelessly local”.

I developed a visual storytelling project with a large global company recently, and we talked a lot about this theme.  In the process, we characterized the “mindlessly global” mindset as testing in three random markets like “Laos, Lesotho, and Luxembourg” and assuming the results would give you confidence in the rest of the world (thanks, Simon and Alastair).  I liked the line so much, I used it again in this cartoon.

Years ago, I interviewed with Apple and got in an argument with a director about the importance of taking local market needs into account (they love argumentative stress interviews at Apple).  He said that local customization was a cop-out and a sign of failure.  He argued that a consumer insight should be universal if you distill it far enough.  If your consumer insight isn’t universal, it’s not a good enough consumer insight.  In other words, being “hopelessly local” is lazy.

When I arrived in the UK, I was interested to see virtually the same Apple ads, but with local British actors (the guys in the middle).  Out of curiosity, I found the Japanese version (the guys on the right).  Same consumer insight, same campaign, right down to the slouching posture of the Mac guy.

After two years of sliding along the global/local continuum, I think the goal involves inverting the standard dichotomy: being “mindfully global” and “selectively local”. The problem is that this is really hard to do.  It takes a lot of discipline and coordination on both sides of the table.  When the two sides have very different priorities, each views the other as a cumbersome burden.

Like most things in business, it’s about progress, not perfection.  Becoming a global brand that resonates locally should feel like an opportunity not a burden.  But it involves thinking global up front, so you don’t have to act local quite so much. 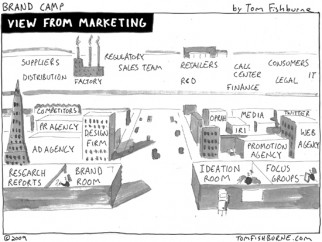 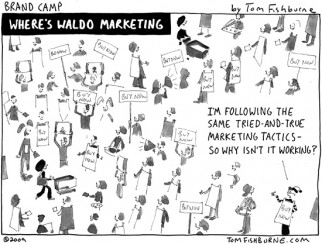