It’s my cartooniversary this week. I thought it would be fun to take a little cartoon walk down memory lane and post some of my personal favorites.

But first I want to thank my fabulous wife, Tallie, for being my cartoon sounding board, collaborator, editor, coach, reviewer, friend, advisor, accountant, conspirator, ego-stroker, sales rep, muse, and consoler continuously all these years. She makes oh so much happen to allow me to doodle as a hobby. And she’s also quite understanding about the occasional India ink stain around the house.  Sorry about those.

It all started with Prash. Prash was the editor of the Harbus school paper at HBS, and kept begging all of his friends to send in articles. We were sitting next to each other in Burden Auditorium watching a speaker, and I finally relented and drew a cartoon on the only paper I had with me, the back of an HBS case.

A few cartoons later, I poked fun at a few business cases we’d read recently and forgot that each example was from Professor Frances Frei’s class, a renowned coldcaller. When the next class started, my cartoon was on the overhead for all to see. Eyes turned to me, and then there was a big wave of laughter. My euphoria subsided momentarily when Frances used it as an opportunity for me to open the case, but I was hooked on cartooning from then on.

I re-named my cartoon strip Sky Deck, which was what we called the back row in each class room, where all of the goof balls and jokers sat, and you could get away with stuff easier. This is contrasted with the Worm Deck, where you were on full display.

Within weeks of my second year at HBS, September 11th happened and we, like everyone, were in deep shock.  I found a little solace in drawing this cartoon.

The “HBS stereotype” always surprised me, because I rarely found the Type A arrogance that’s typically described (I honestly think it’s more of a very vocal minority). Anyway, I thought I’d parody it as I neared graduation.

When visiting Paris at some point that year (boy, do I miss student holiday schedules), my wife and I stumbled across a gallery of Jean-Jacques Sempé, a very poignant French cartoonist who I later learned paints a lot of New Yorker covers. He inspired me to simplify and expand to a larger panel size, which I tried in this graduation cartoon. 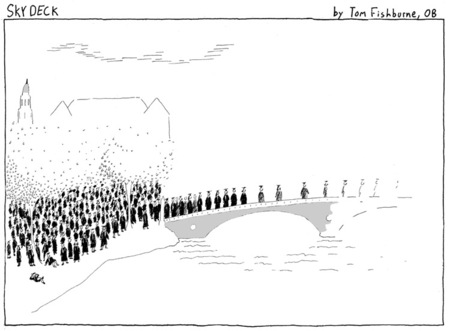 I self-published and sold a book of my Sky Deck cartoons, with all proceeds donated to the National Alliance for the Mentally Ill. This irritated the new editor of the Harbus, who wanted the proceeds to fund the paper, and even pointed me to the small print under the masthead that “all contributions were owned by the paper.” (So, I guess I have seen the HBS stereotype after all.)

Anyway, I posted all two years of Sky Deck cartoons here.  Every year in late Fall, I see a huge spike in web traffic there, as someone apparently forwards the link around to his classmates to blow off exam steam, so I’m glad Sky Deck is still relevant to new students.

After graduation, I still had the cartooning itch but no longer had a student paper. So I shifted my attention to General Mills. I had only worked in startups before, so “the General” was a bit of a culture shock. I found myself scribbling cartoon ideas in the margins of my meeting notes (just as I had in the Sky Deck in school). The name Brand Camp came from American Pie (“this one time, at band camp…”)

I knew that Scott Adams originally started Dilbert by posting cartoons to the side of his cubicle at PacBell, so I decided to follow his lead. Five years ago, I tacked this cartoon up and emailed it to the thirty or so associate marketing managers in my class.  I said to let me know if they wanted me to take them off the list. No one did, but I got a few dozen emails from people I didn’t know asking me to add them. 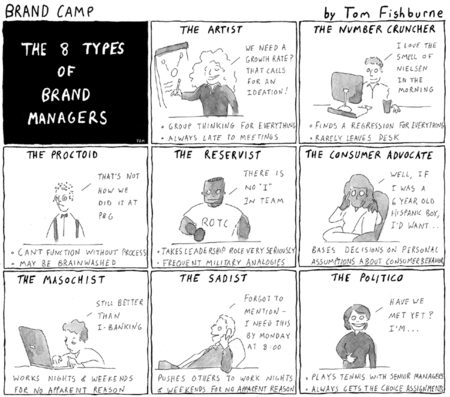 I started anthropomorphizing products. When you work in consumer products, and are surrounded by packaging, they do start to feel like characters in the room. I find myself using cereal boxes the most. 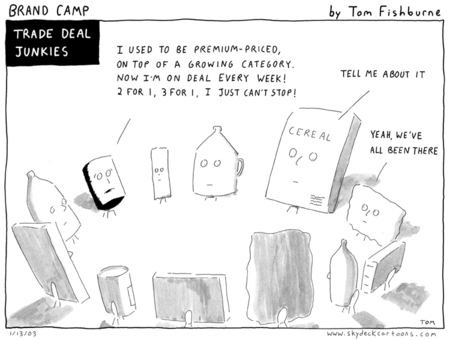 General Mills is very hierarchical and for a while I feared I would be disciplined for rocking the boat. I came to my desk one day to find my latest cartoon below, with a personal note of support from someone on our leadership team. That made my day. 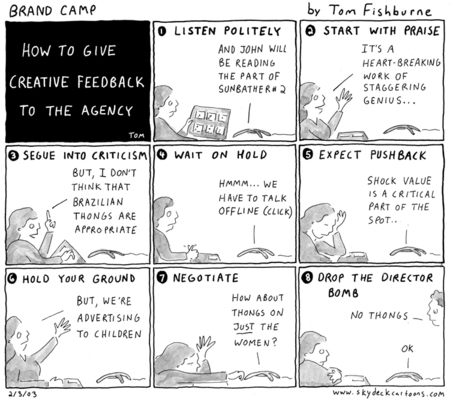 But still I felt a little worried about reprisal with some cartoons (winding up with a job assignment in Siberia or Fargo or Baco’s for irritating the wrong guy). I waited to move from one division to another before sending this one about our division president. 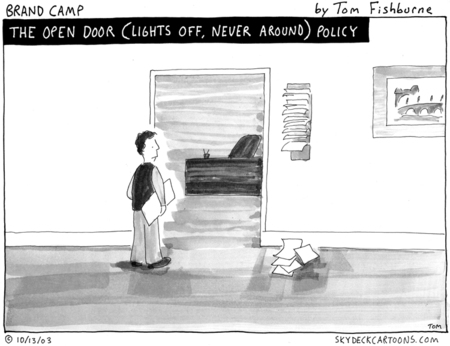 Then I had a meeting with Mark Addicks, the Chief Marketing Officer of the whole company, and rather than chew me out about airing dirty laundry over the last year, he gave me the number of a cartoonist friend of his, T Lewis co-creator of Over the Hedge. T Lewis was incredibly helpful and supportive. I never worried about getting chastised for drawing cartoons again.

Brand Camp evolved into a diary of sorts.  I worked on a product line where Wal-mart was a full 40% of the business, which inspired this one. 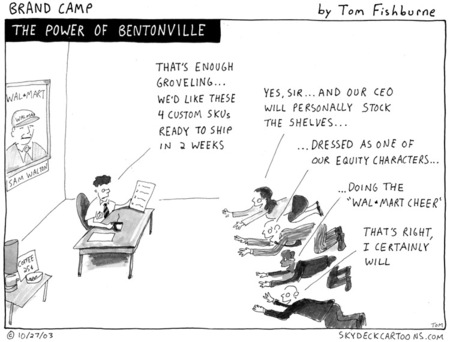 And this one came from a particular brutal period with Nielsen. 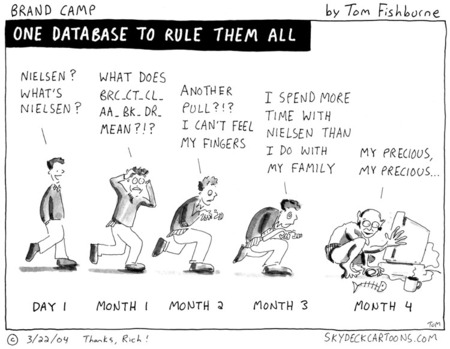 And, then, of course, there was Low Carb.  I remember a rather entertaining public meeting to debate whether it was a fad or a trend.  The conclusion: a “trad” (“seems like a fad, but surely has the longevity of a trend”). 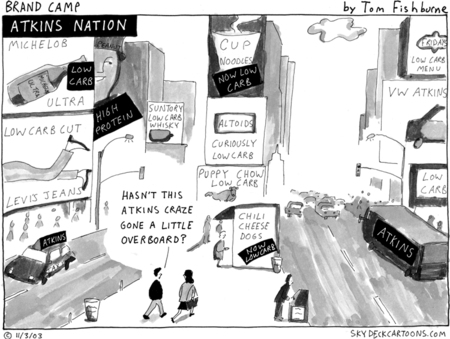 As I former English major, one of the allures of marketing was developing brand positioning. And then I discovered that writing a sentence in a committee is a road to madness. 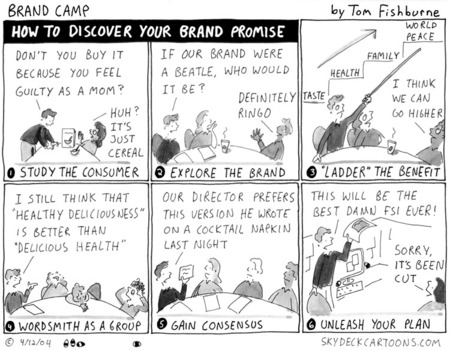 I moved to San Francisco to be closer to Tallie’s family and left General Mills for Dreyer’s (part of Nestle). The office was much smaller, so Brand Camp expanded beyond big company stuff to marketing in general. 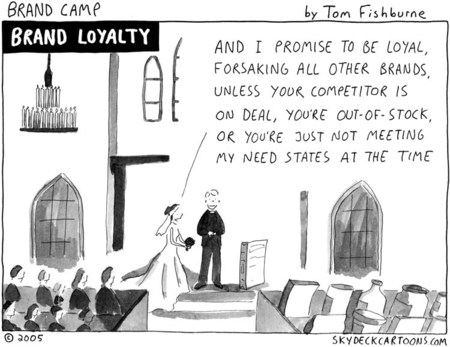 I starting getting invited to speak at conferences with my cartoons as props (which I discovered I love doing). In advance of the Stagnito’s NPD conference, I surveyed everyone on my cartoon list for the top “fatal flaws” of marketing.  Someone came back with the phrase, “wishing for the volume fairy”. Some of my favorite cartoons have been inspired by emails from you. 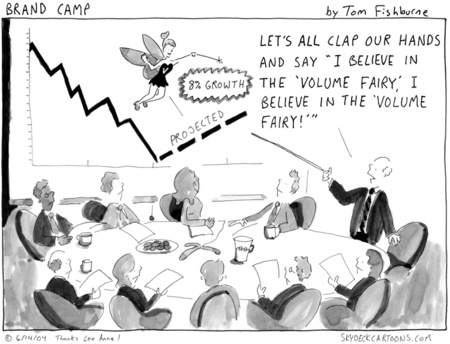 With the arrival of our daughter, I branched out briefly with a parenting cartoon called dadapalooza. Out of coincidence, our youngest daughter just followed her big sister’s crib-walking trick last night for the first time. 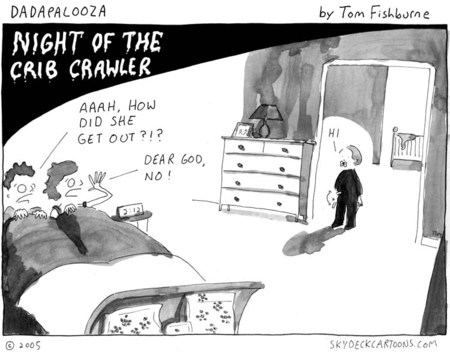 I also experimented a bit with a San Francisco cartoon called Fogscapes. 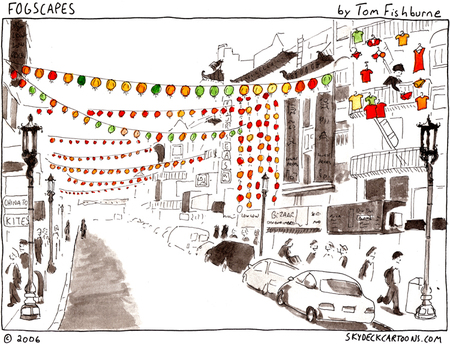 Ultimately, though, I decided to focus on Brand Camp.  I like that the content is really niche, and not something that everyone gets.  I’ve enjoyed getting emails all over the world from people who say they strike a chord with them.

I’ve starting meeting some marketing pundits I respect via my cartoons. Jackie Huba from Church of the Customer asked me to contribute a cartoon for the WOMMA Conference. I later picked this as my inaugural cartoon for Brandweek. 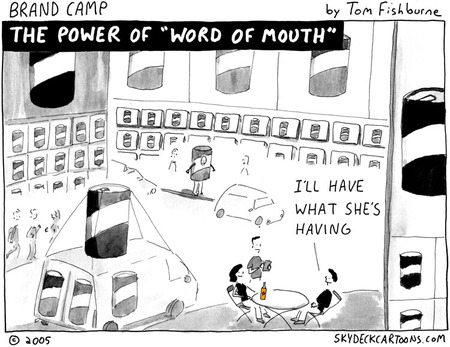 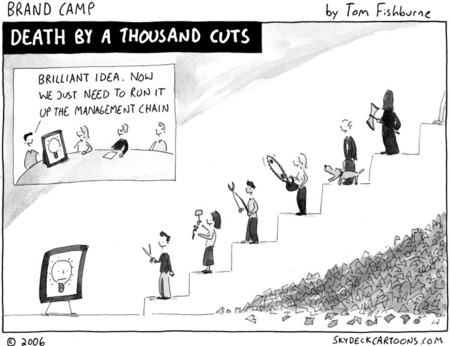 When I first came across method, I was inspired by the challenger brand story. Then I realized that founder Eric Ryan was on my cartoon list. So, I sent this cartoon as a way to meet him, parodying the famous Apple 1984 ad. This cartoon eventually led to my job there. 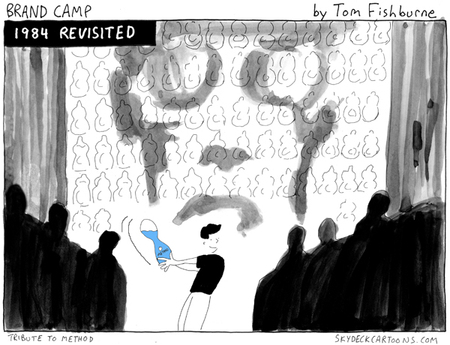 I got lulled into blogging by osmosis.  I started seeing my cartoons pop up on different blogs and decided to start a blog of my own soon after drawing this cartoon. It found its way to a lot of creative blogs, including Dan Germain’s, the creative guy at innocent. 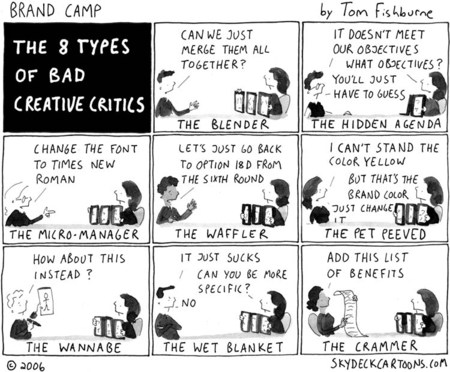 With a blog, it’s been fun to make my cartoons a little more topical and tell the story behind each one. This cartoon in particular got a lot of attention. 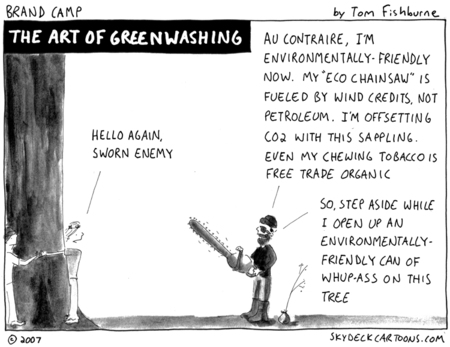 So, that’s about it for the tour. I never thought I would go to business school to discover a hidden passion for cartooning (good thing I didn’t write that in my application anyway), but life is funny that way.  I’ve now been a Brand Camp cartoonist longer than any one job I’ve ever had.  Seven years and almost 200 cartoons later, I’m very much enjoying the ride.  I hope you are too. 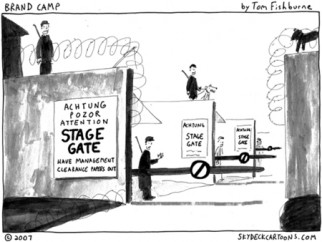 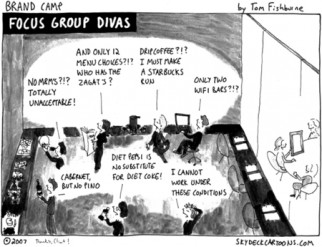