A cafe in northeast Germany implemented a quirky new policy to encourage physical distancing as they re-open.  Cafe & Konditorei Rothe is asking customers to put on colorful hats made out of swimming pool noodles that stick out several feet in all directions.

I think the image of customers wearing swimming pool noodle hats is emblematic of “business as unusual.” It not only reveals how strange this next chapter feels, but how businesses large and small are trying to find creative ways to adapt.  As I heard someone say recently, “we’re not going back to work; we’re going forward to work.”

A telling chart released by CB Insights this week tracked the number of times the words “new normal” have been mentioned in Earnings Calls transcripts every quarter since 2008.  No surprise it’s a hockey stick curve, with a spike in early 2020.

Another expression that spiked in recent Earnings Calls is “unprecedented times.”

Simon Sinek recently took issue with the expression “unprecedented times” in a video conference with his internal team that he released publicly.  In the call, he said:

“These are NOT unprecedented times.

“There are many cases … where change, or something unexpected, has put many companies out of business, and made other companies come out stronger and reinvent themselves…

“The invention of the internet put many, many companies out of business; the ones who could not reinvent themselves for the Internet Age but rather doubled down on the old way they did business…

“Every video store is out of business because of streaming.

“When Starbucks moved into neighborhoods, many coffee shops went out of business. Not because of Starbucks, but because they refused to change the way they did business.

And the world is different.”

Here are a few related cartoons I’ve drawn over the years (including a couple I drew during the 2008 recession): 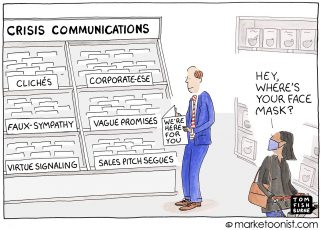 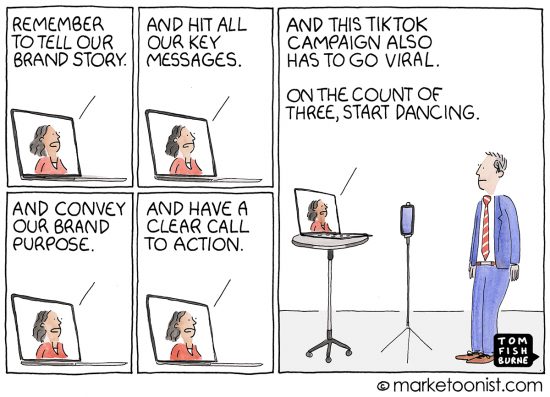