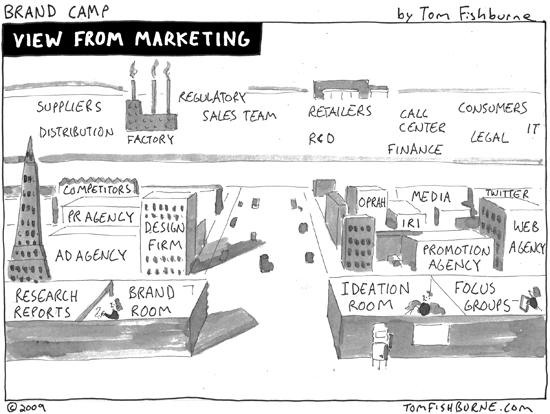 I’ve always loved that classic Saul Steinberg painting “View of the World from 9th Avenue”, which The New Yorker ran as its cover in 1976. I love the detail of the first few streets, and then Los Angeles as a tiny speck in the distance. 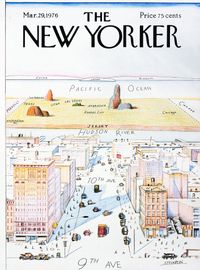 This image popped to mind recently when I was thinking about the marketing ivory tower.  It’s really easy for a marketer (particularly in a large company) to start wearing blinders and only see the immediate stimulus of the office around them.  There’s such a steady diet of research reports, agency reviews, focus group results, and internal meetings that it’s sometimes difficult to actually see the wider world.  You start breathing your own exhaust.

Some of the wider activities of the company (the factory, the sales team, the call center) can appear as specks in the distance.  Even further away appears the world outside the company, the retail shelves and actual consumers.

Mark Addicks, the CMO of General Mills, used to say the smartest member of the brand team is the one who has just joined.  Their eyes are still open, and they aren’t filtering their own observations and insights through the deeply rooted company understanding of how the brand works.  They’re willing to actually question the dogma of the brand.

Mark used to encourage everyone to write down all of their thinking and insights about a brand before they actually join a brand team.  Before they start drinking the Kool-Aid and parroting the same stock consumer archetype definitions and brand promise statements.  That notebook of virgin observations becomes a handy reminder to refer to later when you’re fully embedded.

I also think it’s useful to spend as much time in the field as you can.  But I don’t mean the luxe Soho offices of the ad agency.  The real observations of the brand can be found by stocking shelves alongside a field sales rep, or talking to the store manager of a small Midwestern grocery chain, or spending a few hours answering calls in the call center, or putting on a hair net and hard hat and talking to a production line engineer as the 4am shift starts.  All of those activities can teach you a thing or two.  And all of them could become marketing tactics.

A few years ago, I interviewed someone for a supply chain role and asked what he would do personally to increase consumer advocacy.  Rather than shunt this question off as “not my job,” he came up with an idea to print jokes on the sides of the brown corrugate cases that hold the products on the way to the store.  He thought that if your gave the stock room guys a rare chuckle, they would take particular care in stocking your product on the shelf.  This would lead to better merchandising in store.  And because you have to print on the cases anyway, it doesn’t cost any more.

The best brands are made up of a “1000 nice little touches” like these.  But you have to keep your eyes open to find them.

the tension of glocalization 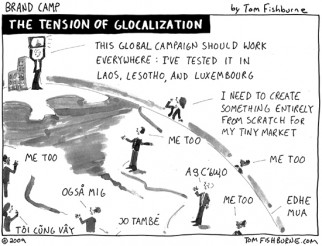