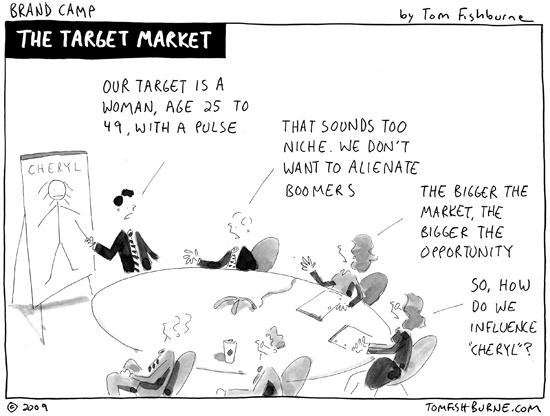 I’m in San Francisco this week, and was invited by Alice at Clorox to give a talk while I’m in town. My talk is titled “everything I needed to know about innovation, I learned by drawing cartoons” and one of my themes is the importance of finding a niche.

I once heard Mark Addicks, the General Mills CMO, complain that most positioning statements he read were way too broad. He described the target market of these briefs as “woman, age 25 – 49, with a pulse.”

By trying to blandly appeal to everyone, you wind up not really appealing to anyone in particular.  Yet, in many companies, “niche” is a dirty word, right up there with “polarizing”. Concepts that feel too “niche” can get shelved, because the assumption is that they won’t appeal to the mainstream.

The world doesn’t need another blandly appealing mainstream idea. I think the real opportunity is to find a niche and give them something they will walk over hot coals to buy. Even if it’s polarizing. Especially if it’s polarizing. By giving something truly remarkable to a niche, the idea can still be appealing to a wide audience.  But it needs a niche at the core. The mainstream is not a target market.

When I started drawing cartoons, I talked to a few professional cartoonists, and they all told me that my material was too niche, and I should find something mainstream like parenting and then send my material to newspaper syndicates and hope for the best. I played around with a parenting cartoon for a while and scaled back Brand Camp. And then, someone emailed me that he was really disappointed. He said there were a million parenting cartoons out there, but there was only one brand management cartoon.

So I decided to focus on a niche, and realized there are actually a lot of people in that niche. And there are even more people who may not be in that niche, but still like it.  And, after focusing on a niche for a while, the cartoon somehow managed to grow. Just two weeks ago, the New York Times linked to one of my cartoons as part of a feature on the recession. I don’t think that would have happened if I’d only aimed wide at the start.  I’d still be writing to syndicates hoping to get a shot at “the mainstream”. 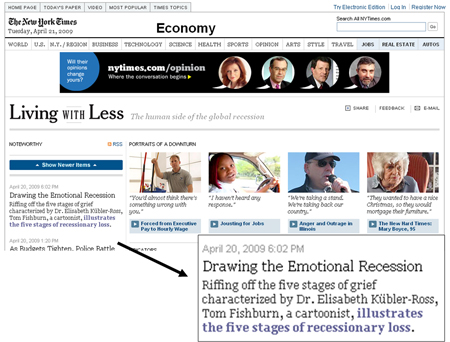 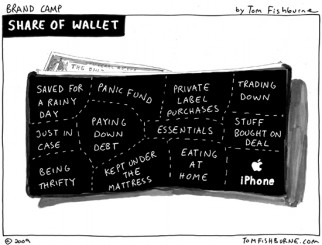 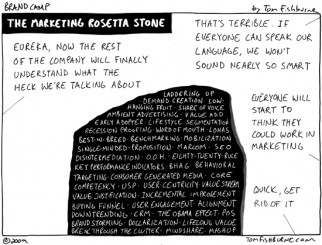