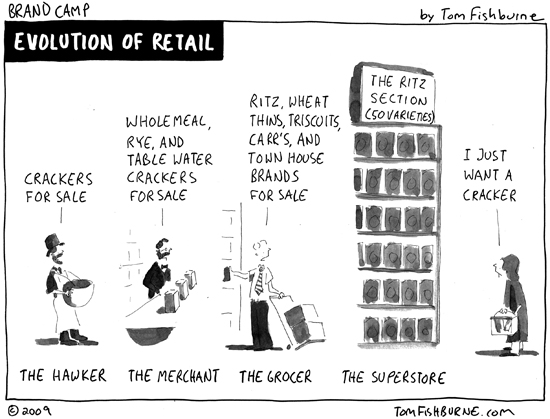 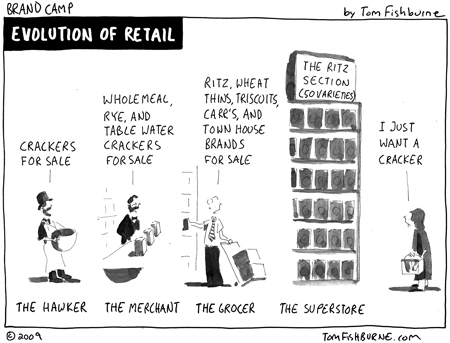 I was fortunate to hear Seth Godin give a talk in London this last week. He led a packed room through a whirlwind tour of his ideas on marketing, business, and leadership at large.

This cartoon was inspired by something Seth covered early in the talk. He put up a few slides with photos from his local grocery store, including a massive 16-foot section with nothing but tofu. He asked the audience, "remember when tofu just came in 2 varieties? Plain and extra plain?"

The level of choice proliferation in the last decade is staggering. So much new product development is made up of incremental variations that don't really add anything new. Much of the time, a new product launch is just table stakes to keep another facing in the store. No wonder the new product hit rate is so low.

When I worked with ice cream, every new launch required seven items because that was the number of pints in an average ice cream shelf. A new line of seven gave us the greatest chance of nabbing extra shelf space in store. Flavors number six or seven were never as strong as the others, but we pushed them anyway. Writ large, it's easy to see how SKUs have expanded exponetially over the years.

I was thinking of this dynamic this weekend when I took my family to a museum in York with a reconstructed Victorian street, complete with a working Victorian grocery store. As a modern shopper (and marketer) taking a temporary step back in time, I was amazed by the lack of choice. But, I also found the relative quiet and simplicity kind of refreshing.

On the way out of town, our train passed a picturesque British town with a quaint old church on a hill, overlooking a 100,000 square foot ASDA (the British Wal-mart). It struck me how much choice proliferation we've seen over a relatively short period of time.

And it made me question how much of that choice is truly meaningful.

As a parting note, I feel compelled to share my "groupie" photo with Seth. This was the first time I'd met him (although he was nice enough to recommend my book in his blog last summer). When I posed a question from the audience after his talk, he introduced me to the room as the "world's best cartoonist on disfunctional marketing", which put me on Cloud 9. 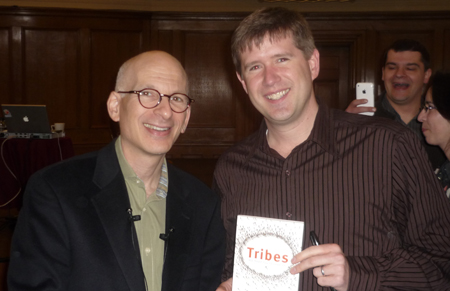 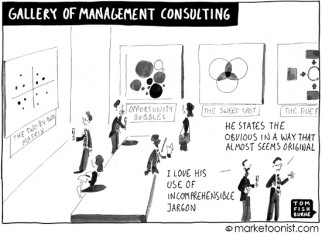 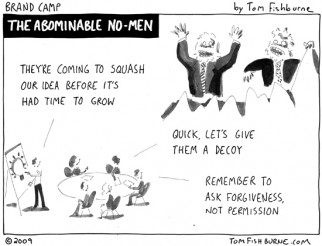